A month ago I headed up to the far north on a day trip to visit my aunt and uncle (the one from the Vushka post) and took along daughter and her husband.  Located a little over 2 hours north of North Bay, ON, the drive was a scenic one as Hwy 11 took us through rugged, rocky terrain dotted with lakes and small cottages as well as passing through small Northern towns that time seems to have stood still for.

Temagami is one of those towns.  If it wasn’t for the modern marina on the west side of Hwy 11 and a pizza joint, you would think you were back in the 1960’s.  The old train station was one of the highlights of the drive up, as soon as we saw it from the car, we had to stop, actually, daughter hollered to stop as she wanted to snap photos of the elegant old building. 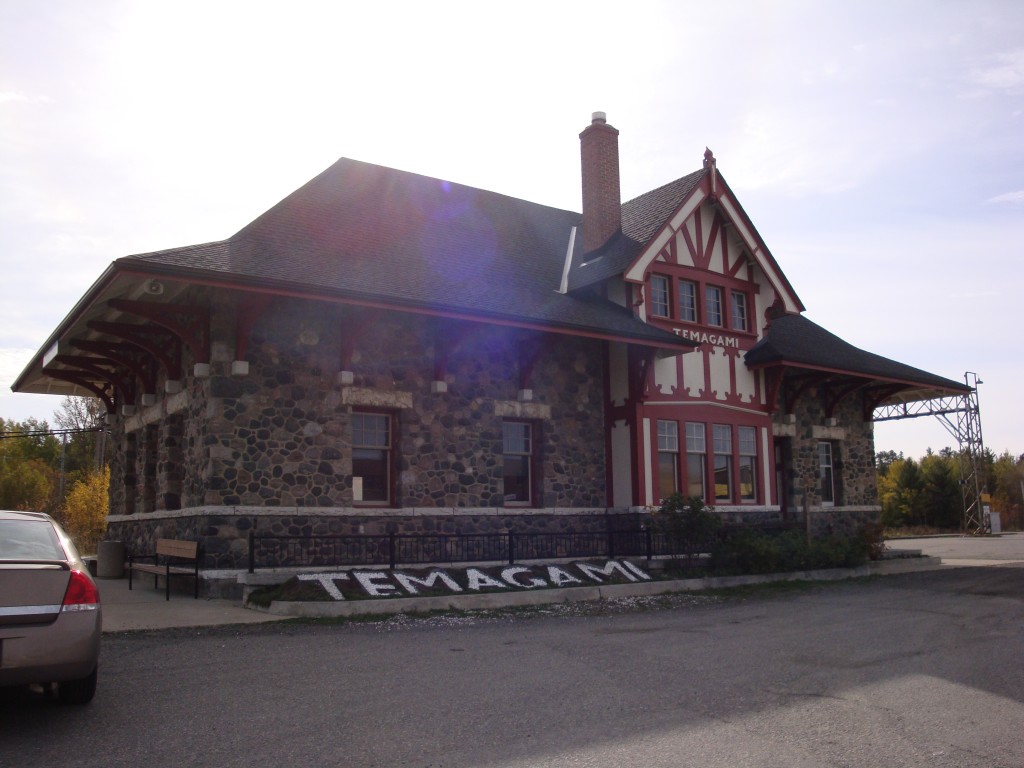 We continued on our trip and about 25 minutes from our destination, we crested a hill and as we descended, the landscape ahead suddenly changed from granite outcroppings and tall pine forests to a sweeping flat vista with nary a tree seen.  Farmland dominates this portion of Northern Ontario, vasts tracts of land devoted to soy beans, corn, wheat and cattle.  Agriculture is the life blood of these Northern towns and its people.

We drove down the long, dusty, gravel road that lead to my aunt and uncle’s farm.  My uncle was born on this farm and has remained here for over 70 years, never seeing the need nor having the desire to head ‘down south’.   The house itself is a quaint, 2 storey structure that has seen a few additions over the years, but otherwise looked the same as the last time I was up when  the kids were little.

Numerous outbuildings dotted the farm and off in the distance, huge combines were working the land, bringing in the last of the grain before the fall rains came.  A noisy flock of Sandhill Cranes were following the combines, eagerly scooping up grain and insects left behind by the behemoth machines. 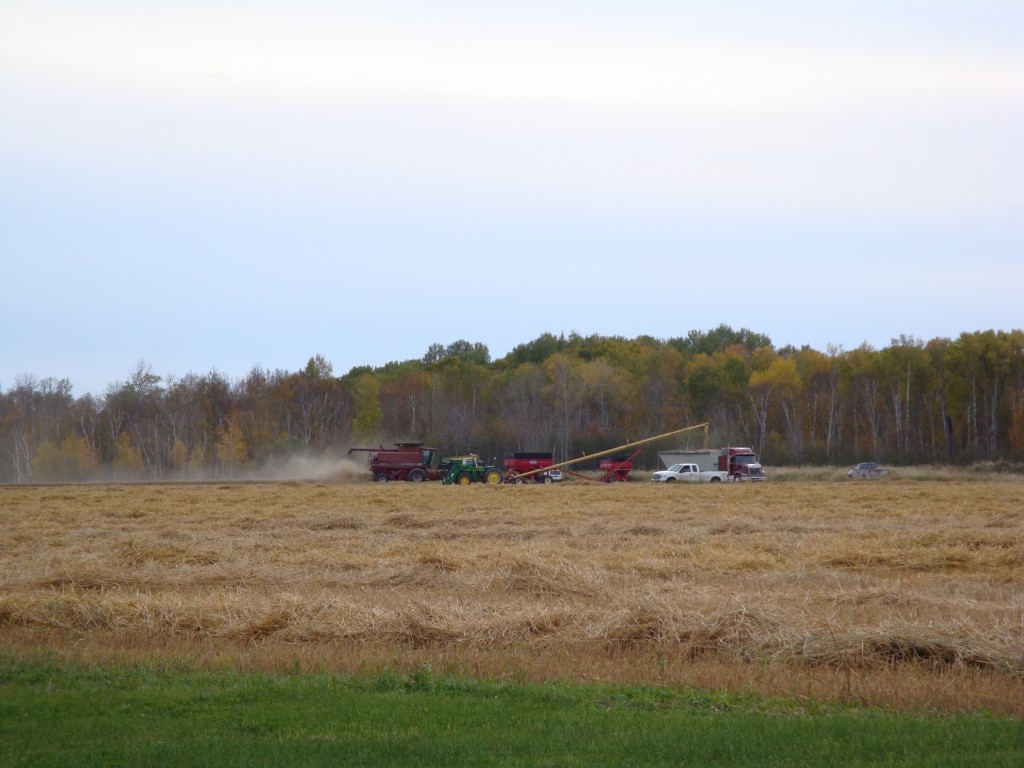 First on the agenda was lunch, then it was off to explore the many outbuildings and see what treasures we could find.  Son-in-law was eager to get inside every building as this was his first trip up so everything was all new to him.  He was like an inquisitive 3 yr old,  climbing up into the cab of a really big tractor in one of the barns wearing an even bigger grin on his face.  Boys….. 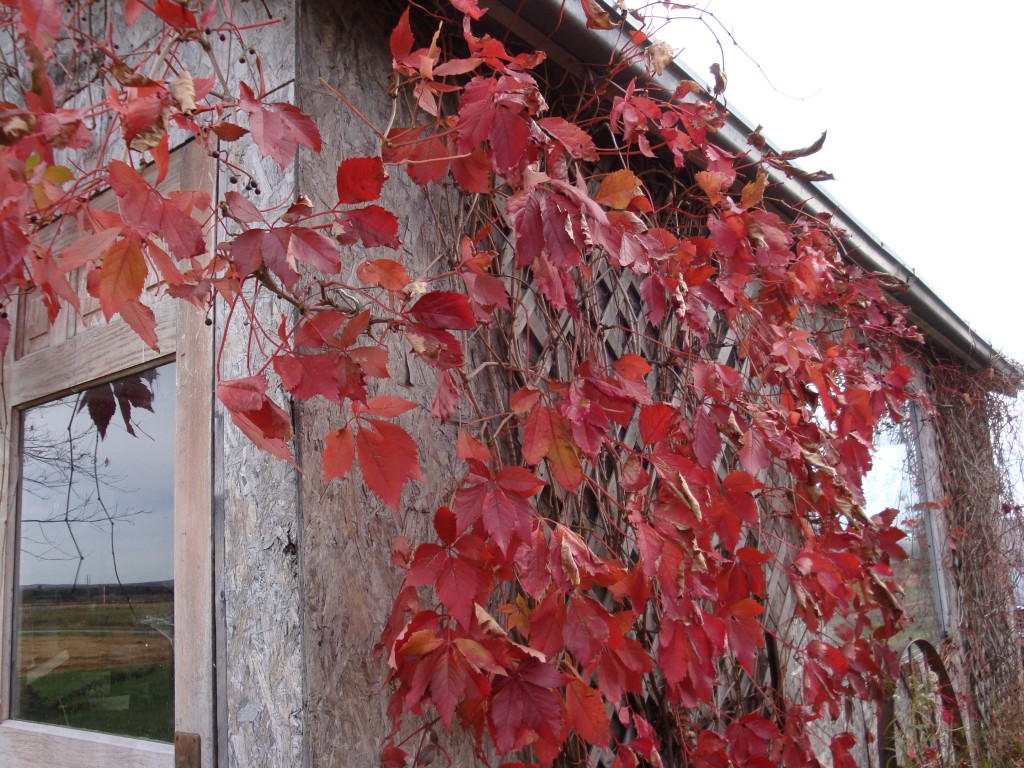 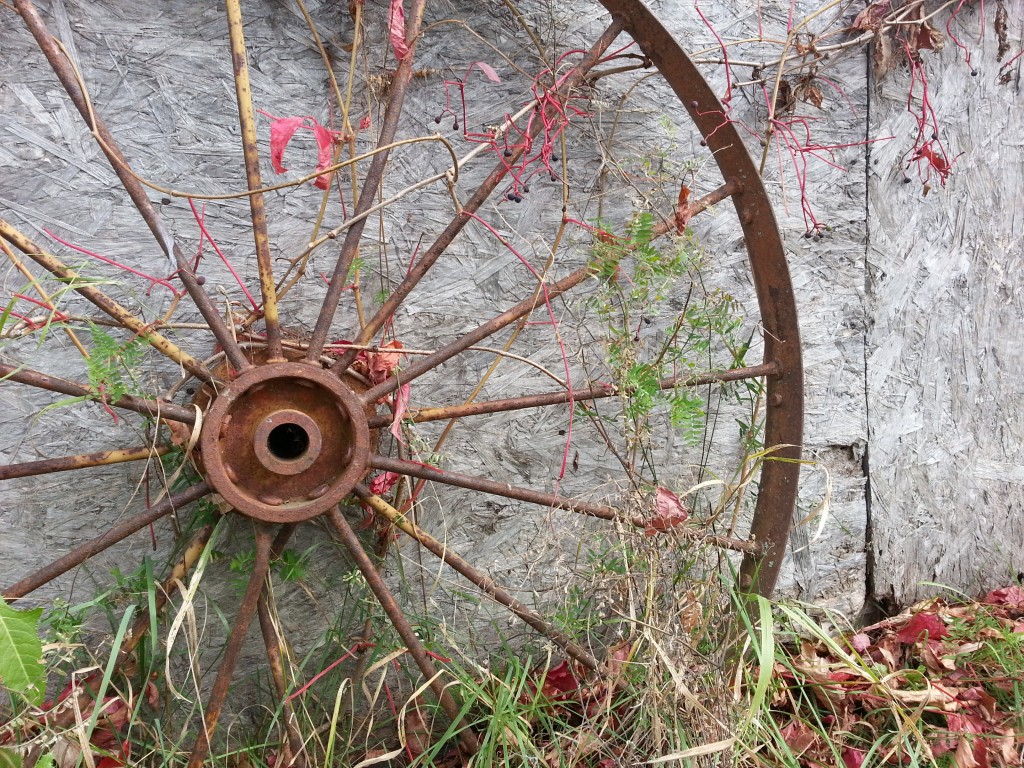 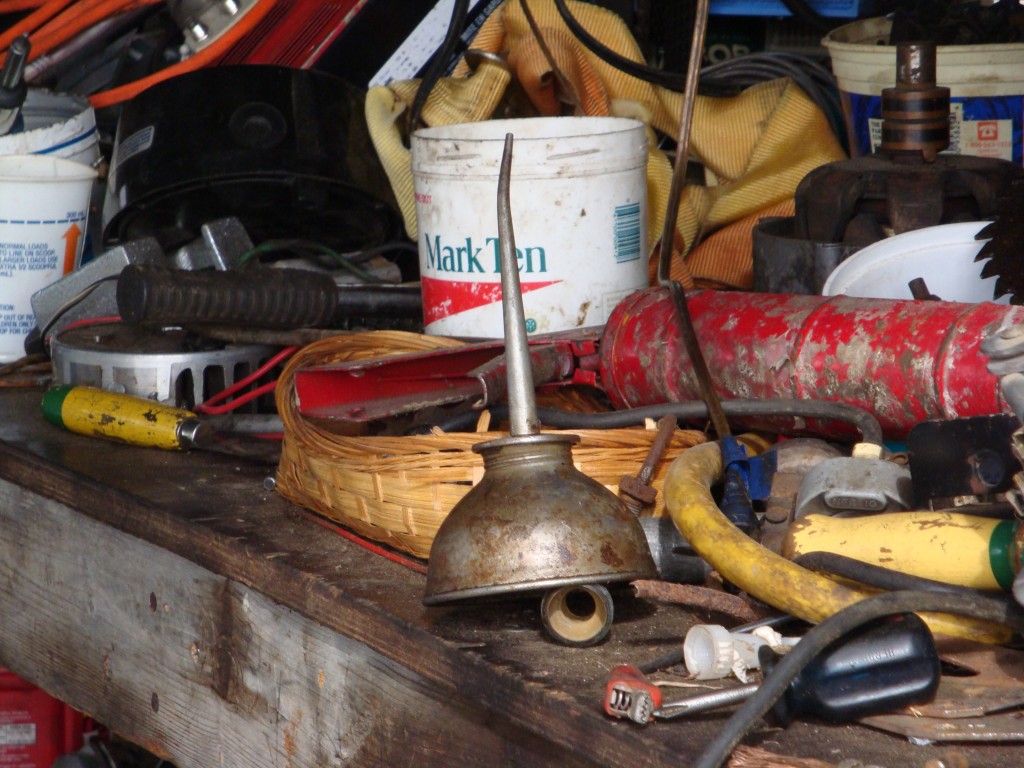 We spent about an hour or so wandering the property as there were many old things to look and marvel at, but I had my eye on obtaining an old barn board to take home.  I had plans for this barn board and needed just the right piece. 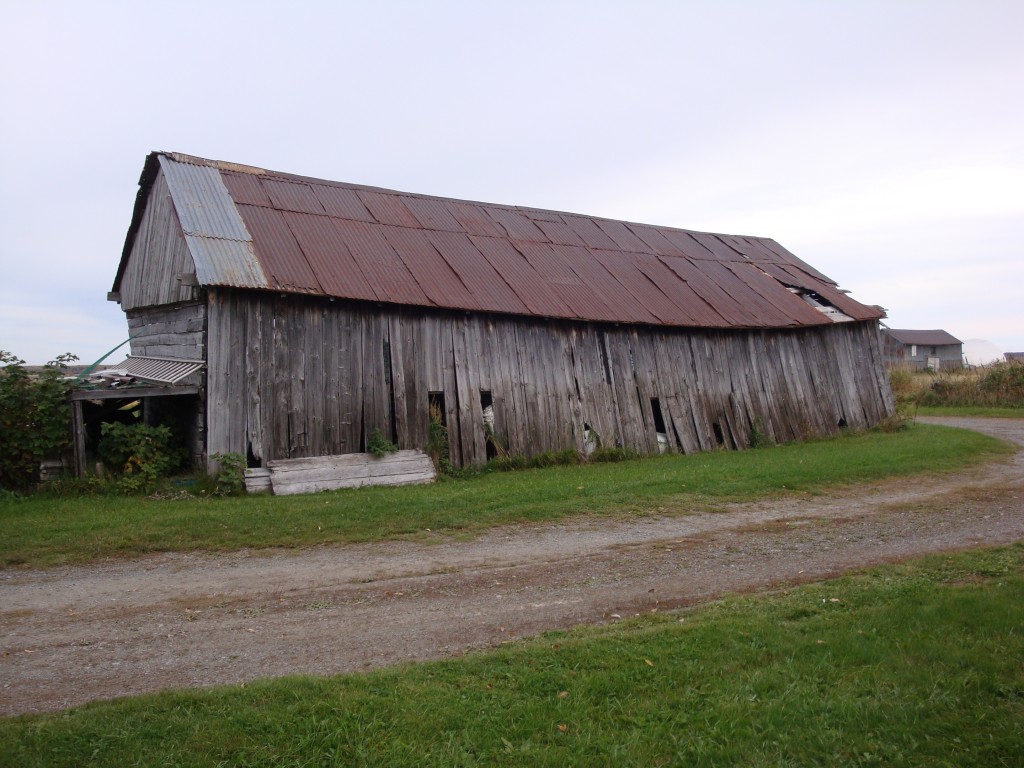 I found it in one of the oldest structures on the farm.  A relic sagging with age and gravity, it still stands as a test to time.   It will probably still be here in another 100 yrs.  I walked around the building looking for any pieces that had fallen off, and sure enough, it didn’t take long to find the perfect piece.

We headed back to the house to say our goodbyes and to load up the car to head back to the Homestead.  My uncle came out and saw the board and I said I hope you don’t mind that I take it with me…he says ‘take as many as you like, take the whole barn if you want’  (this his not often seen humour shining through).

Back at the Homestead, I got to work on my piece of history.  Just prior to our trip up, I had seen a wooden wall hanging in a crafty-type shop and being cheap and all, didn’t want to pay the price they were asking for something I could make myself even cheaper. 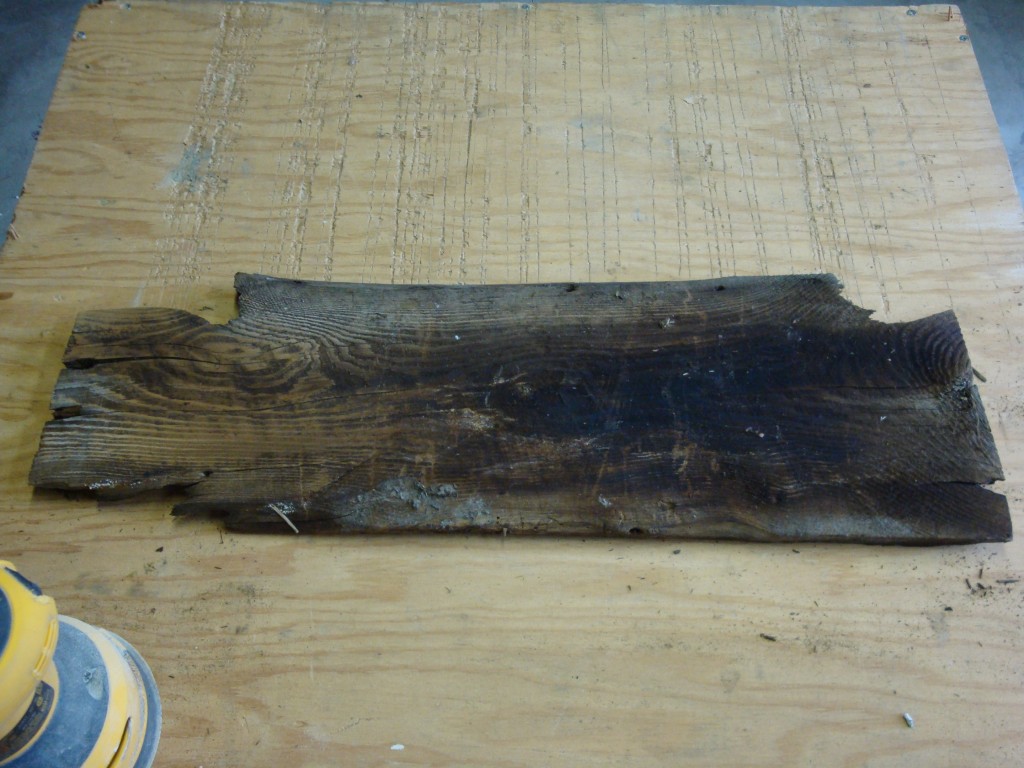 I got to work delicately sanding one side of the board as this was an old, weather-beaten piece and care needed to be taken to make sure it didn’t crumble while sanding it with the orbital sander. 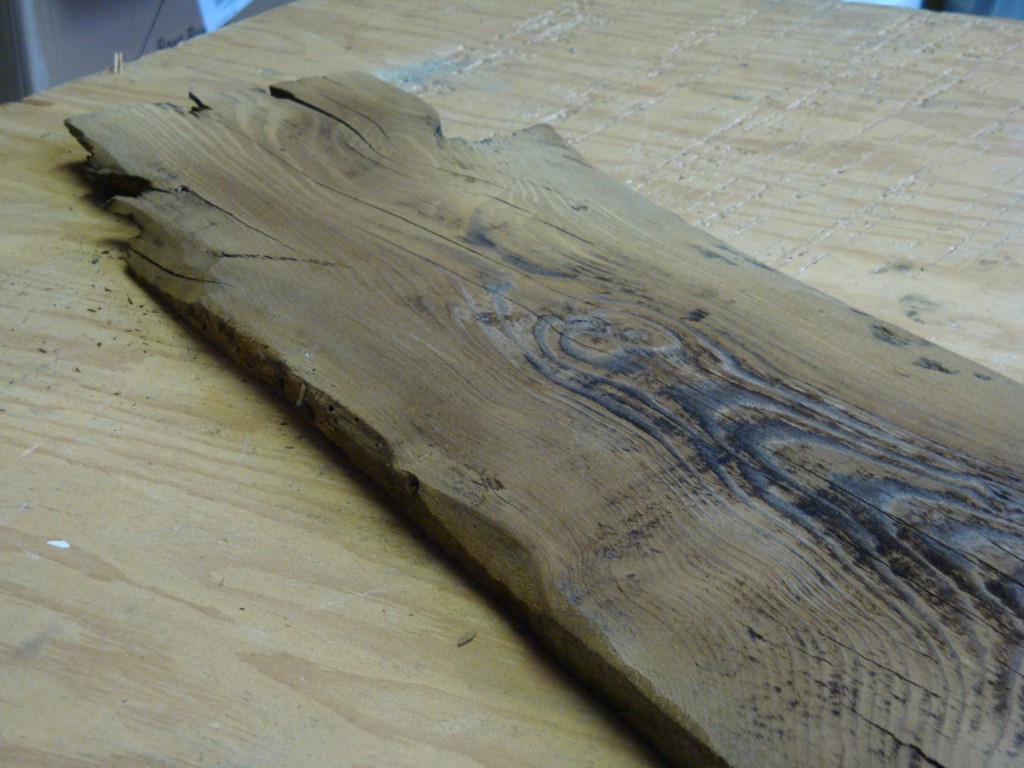 With a renewed surface to start from, I applied about 6 dozen coats of primer (this was a severely dyhydrated board), then 2 coats of paint and it was almost ready to go.  Next was outlining the stenciled letters I wanted, followed by painting the letters in shiny black….

and here it is…my renewed treasure which will remind me of my aunt and uncle’s farm every time I look at it.

It is just perfect….