One of my all time favourite Ukrainian meal items are Vushka (although we call them Oushka, pronounced ‘oosh-ka’).

These plump, mushroom filled dumplings are usually served with Borscht, placed right into the bowl of soup served with smetana (sour cream) on top.  They are little mushroom filled pillows from heaven and I could eat a plateful (and have been known to) all to myself.

A couple weeks ago my daughter, her husband and myself headed up to visit my Aunt and Uncle who live over 2 hours farther north than the Homestead.  Hence why we made the trip from the Homestead as opposed to driving from Southern Ontario….6 hours one way is a looong way.  As the kids were coming up to the Homestead for the weekend anyway, we decided a side trip to see Lydia and Jack was necessary.

Once my Aunt found out we were coming, she promptly switched into Ukrainian Food Overdrive (known as UFO, not to be confused with that other UFO meaning).  Out came the Borscht pot, rich soft dinner rolls were prepared and of course….Vushka….lots of them.

Son-in-law had never had them before, but he loves anything mushroom related, food in general actually, so he was up for anything.

Lunch was pretty much ready just after our arrival.  We stepped into her farm kitchen and our noses were immediately smacked with the aroma of the fresh, home-made dinner rolls coming from the oven.  One of the best smells to walk into, along with apple pie, which was sitting on the stove, also pulled fresh from the oven.

As we sat down to a long awaited treat, I was immediately brought back to Christmas Eve dinners when I was young, watching my Baba plop heavily laden platters of Varenyky (Perogie) and Vushka onto the table.  Heaven, I was in absolute heaven.

Here is how you can make your own Vushka, I urge you to try them the next time you get your soup pot out.  Borscht isn’t the only soup they go in, they also would go very well in a beef vegetable soup.  I hope you enjoy them. 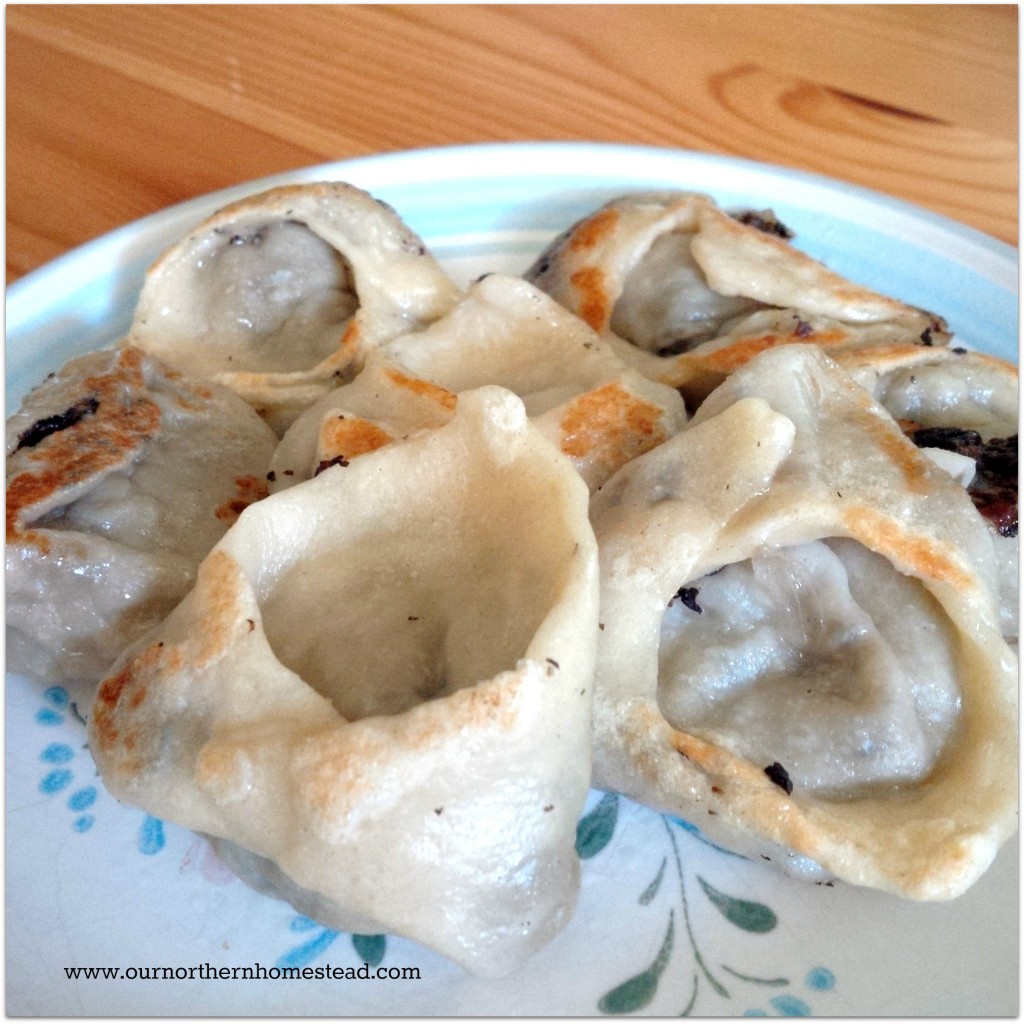 Cook onion over medium-low heat in butter until tender, add mushrooms and cook together until mushrooms are cooked through.  Season to taste with salt and pepper.  Remove mixture from heat and beat in the egg yolks.  Let the mixture cool thoroughly.

Mix flour and salt in a deep bowl.  Add egg (or egg yolks) and enough water to make a medium soft dough.  Knead dough on a floured surface until smooth, do not overknead as the dough will then be tough.  Divide dough into 2 parts.  Cover and let stand for 30 minutes.  Roll dough as thin as possible on a floured surface and cut dough into 3” squares, rerolling scraps until used up  ** making perogie dough is something you need to get a feel for, add half the water first, then add small amounts until you get the consistency you are looking for.  Adding more if necessary.

Place a heaping tsp of filling in the centre of each square.  Bring one corner to another (diagonally) to form a triangle.  Take the 2 sides of the triangle and pinch together, this forms an ‘ear’ shape with the top point, hence the name Vushka, which translates to ‘Little Ears’ in Ukrainian.  Boil as you would perogies until they float.  Excellent served in borscht or sauté the leftovers on their own with a little butter…a piece of Ukrainian heaven!