As we approach Christmas at a speed that can only be compared to a Japanese super rail train hurtling through the countryside with an avalanche of hot lava on its heels,  one of the very few things I actually look forward to at Christmas is making Varenyky.   More commonly known as Perogies if you are from Poland or Pelmeni if you are from Russia.  They are a common eastern European dumpling filled with a wide variety of ingredients indigenous to their countries of origin with either cheese, meat, fruit and sauerkraut being the norm.

There are variations in using the dough, like stuffing them with a diced, fried mushrooms and onions known as vushka’s in Ukraine and floated in Borscht, another super yummy family tradition typically served at Christmas as well as Easter.

But today we are focusing on the soft, pillowy half moon shaped dumplings that are filled with a heavenly potato/cheese mixture.  Actually, I make 2 different kinds.  The very traditional potato/cottage cheese and the “North Americanized” potato/cheddar cheese variety found on many a pub menu.  The fillings are made ahead and cooled in the fridge before use, otherwise you would have hot doughy mess that wouldn’t be any fun to work with.

Potato/cottage cheese filling; take one 500 ml container of cottage cheese and scoop the cheese into a double layer of cheese cloth.  Bring the four corners of the cheesecloth together to form a pouch and tie with a length of string.  Suspend the cloth bag over a bowl on the counter (I tie mine to a kitchen cupboard door handle) and let it drain for at least 4-5 hours.

Once the cheese has drained, peel and dice 4 large white potatoes into 1″ cubes, rinse in a colander then place in a large pot and fill with cold water.  Bring to a boil and simmer until tender (about 25-30 minutes).  Drain and add a generous couple tablespoons of butter to the potatoes and mash until smooth.  Add the drained cottage cheese and mix well.  Season to taste with salt and pepper.  Allow the mixture to cool overnight in the fridge in an airtight bowl.

Cheddar Cheese/potato filling;   Shred 4 cups of sharp cheddar cheese.  Once the potatoes are done, add the cheddar cheese and mix well.  Add salt and pepper to taste.  Place in a airtight bowl let sit in the fridge overnight.

The basic dough recipe is easy and very similar to an egg pasta dough.  Although, if you ask 100 Ukrainian women, you will undoubtedly find 100 different dough recipes.  Everyone has their own personal favourite.  This is my Baba’s (Ukrainian for Grandmother) recipe.

Whisk egg yolks, oil, water and salt.  Sift in flour one cup at a time, mixing after each addition. Depending on the size of your eggs, you may need more or less flour. Turn out onto a well floured board and knead until smooth, adding more sifted flour by small handfuls if necessary.  Divide in half and wrap one half immediately in plastic wrap so it doesn’t start to toughen.  Once you have used up the first half, then process the second half of the dough.

Working quickly, roll out dough to about an 1/8th of an inch thickness.  Using a perogie cutter or large cookie cutter (at least 4″ in diameter), cut out circles of dough.   Re-roll scraps to cut out as many circles as you can before the dough toughens too much.  I like to take my rolling pin to the cut out circles to make them larger and thinner as the dough is quite elastic and tends to bounce back smaller than what you have initially cut out.

Place a heaping teaspoon of filling into the middle of each circle of dough, fold in half and pinch edges tightly to secure.  Place on a towel lined cookie sheet.  Once you have a cookie sheet filled up, place another clean towel over top and place the tray in the freezer.  When frozen, remove and place in a Ziploc bag, marking the bag with the type of filled perogies. 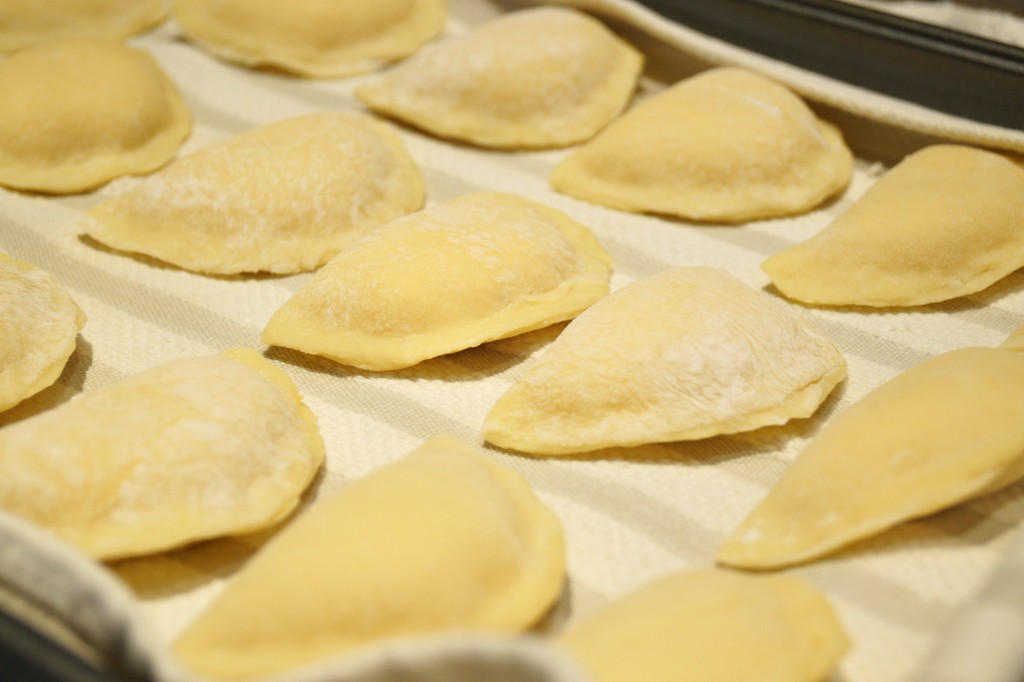 When you ready to cook your little pillows of yumminess, place them directly from the freezer into a pot of boiling water, boil gently, stirring carefully until they float to the surface, which can take anywhere from 4-8 mintues.  Traditionally, they are served with melted butter and sour cream straight from the pot of boiling water, or take them from the pot and fry them with onions (pub style) with extra cheese.  Serve with lots of sour cream and chopped green onions.  Bacon bits are also a good addition.  Anyway you slice it, these are so much better than the store-bought variety. 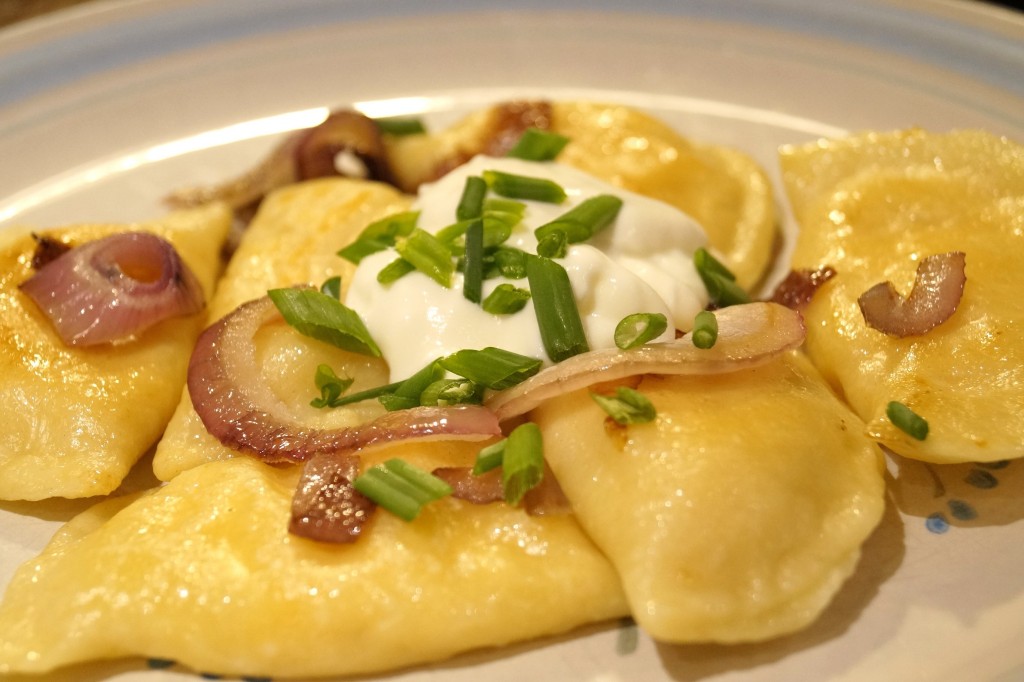 One batch of dough makes about 30 perogies, depending on the size of your cut out circles.

A word of warning, these are very time consuming to make, not to mention it makes a mess of your kitchen, but I encourage you to give them a try if you really want to boast to your family that you made, by yourself…PEROGIES!