* Please note I am editing this blog post because I goofed up.  The reason behind the initial post was two-fold.  First, to document how much of a knitting junkie I have returned to being in such a short time and two….to win up to $200.00 in goodies from The Interweave Store.  You see, Knitting Daily has a contest going on (Blog it to Win it) right now where you show and tell your knitting project(s)/story on your blog to win free stuff.   I love free stuff.  Who doesn’t love free stuff? Who wouldn’t love to pick out $200.00 worth of free stuff from their site?  Only loco people wouldn’t and I am clearly not loco.  Ok, maybe just a tich loco….but I want to win, mainly because I am just so darn competitive.

These are the items I would love, Love, LOVE to get free:

and because I just acquired Bob (see post from October 28th here), I need to learn how to use Bob and these 3 things will help me get there:

Now let’s get on with my story…..from yesterday…

As I type this, another new project has been cast onto the needles.  This past weekend saw the last pair of socks being finished for my daughter (for a while at least, she has 2 brand new pairs in recent weeks) with a pair of mitts now in the works and a hat to do next.

Which led me to thinking…. just how many projects have I accomplished in the last 14 months since my return to knitting?  Knitting is like riding a bike, once you learn, it is with you forever.   I took up the craft (self taught) about 20 some years ago when I quit smoking,  desperately needing something to keep my hands busy before I ate my way to 300 lbs.  It worked too, 6 afghans were ‘manufactured’ during that first year of nicotine celibacy.

After that, many projects were cast on over the course of about 10 years.  Then for some reason (probably having to go back to work), knitting fell by the wayside.  Heading back into the workforce required a new wardrobe, so out came the sewing machine and I spent many years making my own work clothes as well as various other household projects from curtains to cushions and everything in between.

Knitting was the farthest thing from my mind until last year, when I realized I had ‘Southern Ontario’ winter gear (hats, scarves and gloves), which were not at all suitable for the bone numbing cold of Northern Ontario where our newly acquired Homestead is located.

Hence the unearthing of the knitting needles, and that was it,  I was hopelessly addicted again.  Especially when I realized that there are literally hundreds of websites / webpages devoted to knitters.  I spent hours surfing the internet for all things yarn related….I googled hat, scarf and mitt patterns while enjoying side trips oohing and awing over pretty sweaters before setting off to my local yarn shop to choose the perfect yarns for my chosen projects.

After that, it was knit, knit, knit, knit and knit some more….. In the first 3 months leading up to the Fall of 2012, I made 2 hats, one hooded cowl (for daughter), 5 pairs of mitts, 3 pairs of fingerless mitts, 2 scarves and a purse.

Not too shabby for a first run down the sidelines into the end zone.  But then I had my eye on something bigger.  The Grand PoohBah of knitting.  The Homestead needed an afghan and it had been years since I made one.  I still had the original pattern for all the afghans I made long ago, but I wanted something different.   So it was back to the internet surfing to find the perfect pattern….and I did, albeit the actual dimensions for it were quite small.  Our family requires large afghans, this was a baby blanket size of 47″ x 56″, that simply wouldn’t cut the mustard.

So I altered/lengthened and doubled the size of the pattern.  10 months and 17 gigantic balls of yarn later, my King-Sized afghan was finished.  I stood back and marveled at the size….over 6 feet long and almost 7 feet wide.  There is enough afghan to wrap around a humpback whale.   Then I thought….maybe I made it too big??? naw, no such a thing as a too-big afghan, it was perfect. 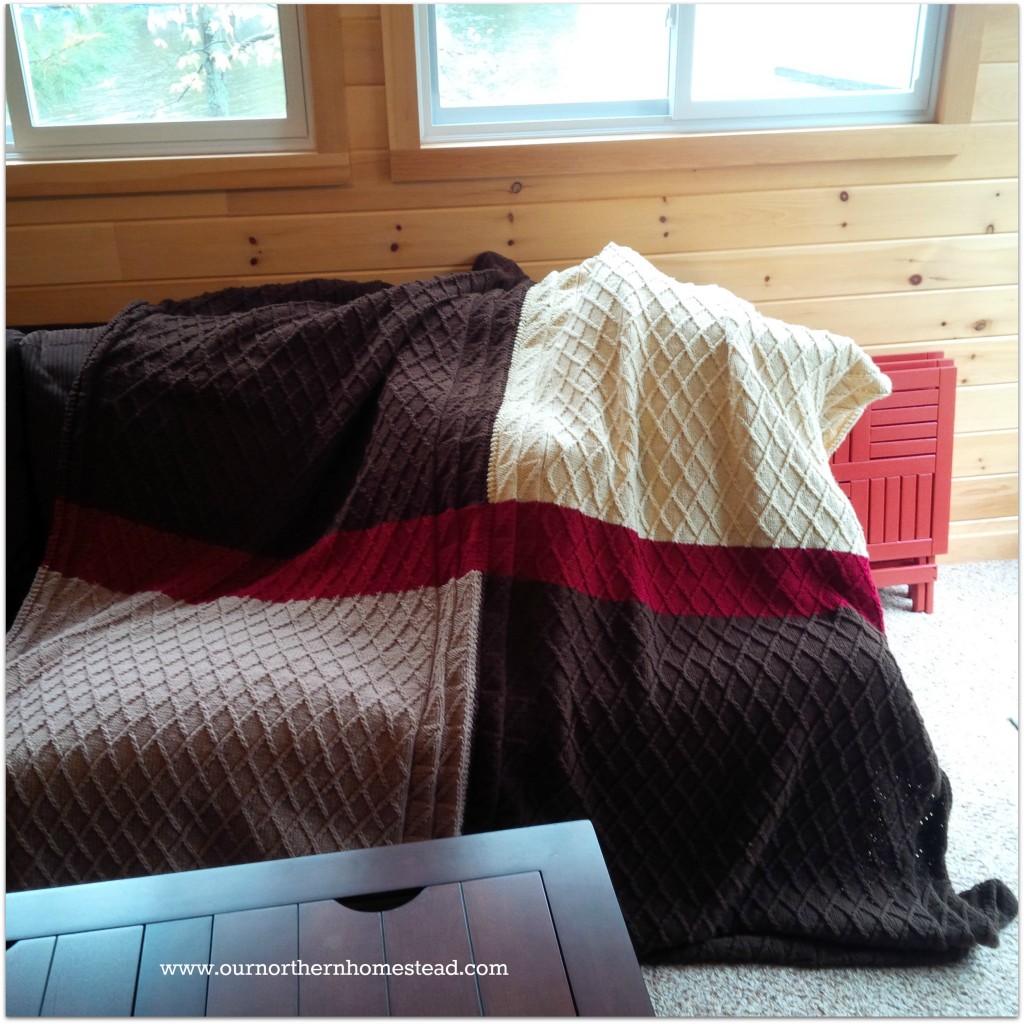 I should clarify that I didn’t spend the entire 10 months knitting the afghan as there was a period over the Spring/Summer that it sat in the corner of the living room, patiently waiting for my return.  It simply was too warm out to sit and knit an afghan of giant proportions in 30C heat.

It was during the early Spring that I was introduced to sock knitting.  I had never, ever made socks before.  I actually don’t even like socks, but these were something that were fairly quick to knit up, are great projects for long car drives and they make great gifts too.  The recipient of most of the socks made since then have been my daughter as she is the sock-lover-aholic of the family.  I did make a few pairs for myself and I am slowly taking a shine to them.  I guess it is the self-satisfaction in making a pair of hand-knitted socks that has me almost…almost liking them.

I still have many more projects waiting in the wings and I try to finish a project before starting another, otherwise I would have piles of needles and yarn stashed in various locations which would soon be classified as UFO’s (un-finished objects) and that is an un-deserving fate for any knitted project.

Knitting has not only been a great joy for me, but it is also a great stress reliever as my job can be quite demanding at times.  I look forward to sitting after dinner to unwind, mindlessly watching tv and letting the yarn do it’s magic on the needles.

Now that I have caught the knitting bug again, it isn’t likely to disappear a second time….

33 thoughts on “The Needles Are Still Clicking Along…”