For 2 days, the almighty Weather Gods were forecasting up to 25 cm (or more) of the white stuff along with blowing, white-out conditions…. Hubby scoffed… ‘Sure, sure, you just wait, they get me all worked up for a big storm and then like Lucy to Charlie Brown, yank the football right out from under me…’

If it is one thing you must know about hubby…is that he loves to shovel snow…don’t ask me why, he has been like that since we met way back in the mood ring fad year of 1974.  Nothing brings a smile to his face faster than seeing snow pile up to the eavestroughs…ok, getting a bag of mini eggs also makes him crack a huge grin like a 4 year old, but the snow? Really? the man is loco….

But today saw us finally….FINALLY…receive a snowstorm worthy of being called a blizzard… complete with school closures, accidents everywhere, airline cancellations at Pearson by the hundreds and CAA having a minimum wait time of over an hour.

Every winter in Southern Ontario the so-called meteorologists (fancy word for weather-guessers) *hint* at impending snow storms, but rarely do they come to fruition, and if they do, they drop a dusting of snow as they sideswipe us along the shores of Lake Ontario before heading off East to dump on the Maritimes (lucky them).

Hubby says we are living on the wrong side of the lake… but I don’t want to live in NY State  I tell him, sure, the shopping is great, but have you seen the way they drive over there?  No thanks, I will stick with crazy Canuck drivers.  If I want to feel really threatened by even crazier drivers, I will go to Montreal.

I digress though, back to the snow.  The office sent out a paged message last night that if the storm came to fruition, the office would be closed the next day, sure enough, about 7 a.m., the call came that the office was indeed closed.  Wow, must be a real danger out there for a real estate office to close…

So I headed down to the kitchen to put the kettle on for tea, then headed down to the family room to build a fire… I love, love, love the smell of a real fire in the wood stove….except when an ill-timed downdraft fills the house with smoke – not good.  But no downdraft today as the fire crackled to life and cast an orange glow into the room. 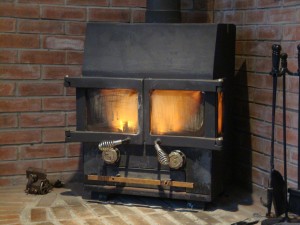 Cozy, that is what snow days mean to me…warm, toasty, wrapped up in a blanket, still in your jammies kind of day.  I look outside and the wind is whipping the snow sideways and blowing off the roof so much that I could hardly see down the street.

I then grabbed my tea and headed up to the office and plop down in front of the PC.  Some emails to answer from the night before, then on to social media to see how many people were scurrying out of harms way that were foolish enough to go out in the worst blizzard in 4 years (I am not making this up, they actually said that on the tv news this morning).

An hour later, PC work caught up, I headed back down for breakfast and tossed another log into the wood stove.  Hmmmm…what shall I do today?  I certainly will not be shoveling, at least not until hubby gets home – he hates it when I spoil his fun and shovel without him.

I could bake something…naw…not in the baking mood, how about knitting? nope, will save that for this evening while watching Discovery…then I looked around and spied a few silver threads hanging from the ceiling corners…. spiderwebs…ick ick ick, if it is one thing I really hate and am terrified of, it is spiders.  So I decided to break out the central vac and banish the dustbunnies, cobwebs and any spiders that dared show themselves.

3 hours later and it was all done…I look outside and the wind is still whipping snow and there is a 2 foot drift on the front walkway…hubby will be thrilled… except for the driveway…our neighbour Dave had brought his snow blower over earlier and cleared off the driveway and sidewalks….crud…hubby is gonna be miffed when he gets home….

As luck would have it, the snow kept falling and blowing around and soon the driveway didn’t look like it had been touched…whew! Dave has no idea how lucky he is….

I had some soup for lunch, then headed up to my office to make a couple phone calls.  As I was finishing up, I hear the tell-tale sounds of tires spinning out front.  Living on a corner lot, you hear a lot of tire spinning during snow storms as cars try and make it around the corner and up the slight incline.  This one kept spinning and spinning and I thought, must be a smart car or some other teeny car.  I get up to look out the window and its hubby, blasting a path up the driveway, going back and forth and launching the car sending snow flying everywhere.

He gets out of the car grinning, like a 5 year old that just stomped through a mud puddle…