When I was in Grade 3 or 4, our teacher gave the class a list of books from the library and we had to choose one of them to read.   Being an undeniable horse nut from the time I could recognize one, I chose to read a novel by Will James called Smoky The Cowhorse (that’s him on the left in the illustration from the book below).

This being my very first ‘novel’, it not only hooked me on reading, but further deepened my love of all things equine.

The story is about a gorgeous, smoky-gray coloured mustang born in the wilds of the western U.S. shortly after the turn of the 20th century.  It follows his life from birth to being captured and broken to ride, to being stolen and mistreated, to becoming a mean, ornery rodeo bronc, to finally being reunited with his first owner.

I think I read this book a hundred times during that school year.  I simply adored it.  Then of course, I proceeded to pester my parents to get me my own horse….which they never did, much to my dismay….

Then I married a wonderful man who surprised me one Christmas with a gorgeous, spirited, white, albino Palomino mare….whose name was ‘Lady’.  I spent a number of years riding her for pleasure at the farm where she was boarded as well as introducing farm/horse life to our kids, not something all city kids get the chance to do.

But the most fun I had with Lady was learning how to ride her in the Western Games classes in the Saddle Club they operated at the farm.  Kozy Acres Saddle Club ran 5 shows a year.  Each show was held the first Saturday of the month from May to September and it contained a wide variety of English & Western Pleasure classes as well as the Games classes.   The Games classes consisted of Barrel Racing, Pole-Bending, Dash for Cash and the Pickup.  The Pickup I never did as Lady wouldn’t tolerate having two riders on her at the same time, she grudgingly accepted me on her as it was (did I mention she was spirited?).  The premise of the Pickup race is that you ran into the corral down the middle at full gallop and at the other end was a barrel where another rider stood waiting, as you rounded the barrel, the other rider would hop on and you would then gallop out with the fastest time winning, as long as the 2nd rider made it all the way with you.

Out of all the shows, the one we really looked forward to though was the August show, as it was THE most fun show of all.  Along with the regular Pleasure and Games classes, at the end of a usually hot, dry, dusty day, we would head to a wide creek at the back of the farm for the annual Water Race.  The creek was about 30 feet wide and depending on annual rainfall, was as low as 2 feet to one year being over the horses heads.  You galloped into the water and then ran (or swam) to the other side, got out, rounded a barrel and then lunged headlong back into the water to come back.  Staying dry wasn’t a requirement, as you, your horse and your tack emerged soaking wet.

Most of the riders had horses that were regulars and the horses were accustomed to the water….but there was always someone who was training a new horse and it was hysterical to watch them trying to get their mounts to enter the water for the first time.    These poor beasts would dig their hind heels into the earth, tuck their chins under their necks and frightfully gaze at the water surely thinking it contained horse eating monsters set to swallow them whole.  They would sidestep and dance 20 paces to avoid getting their hooves wet.  Eventually, someone would have to take their boots off, roll up their pant legs and lead (ok…tug) horse and rider into the water, and once in, the horse took off for the other side, desperate to get out of the water…. of course, 9 times out of ten, the horse didn’t want to come back and the rider would be forced to dismount and lead the skittish animal back into the water and swim back with them.

Luckily for me, Lady loved the water, so much so that it was a challenge just to get her to go all the way to the other side as all she ever wanted to do was stomp and splash in the middle of the creek with her legs…and if left to be, she would go right under and roll around blowing water out of her nose.  On hot summer days, Marg (the owner of the farm) and I would take our horses out for a swim to cool them off, hence where Lady developed her love of swimming/playing in the water (that is me and my little white mare below, circa 1993). 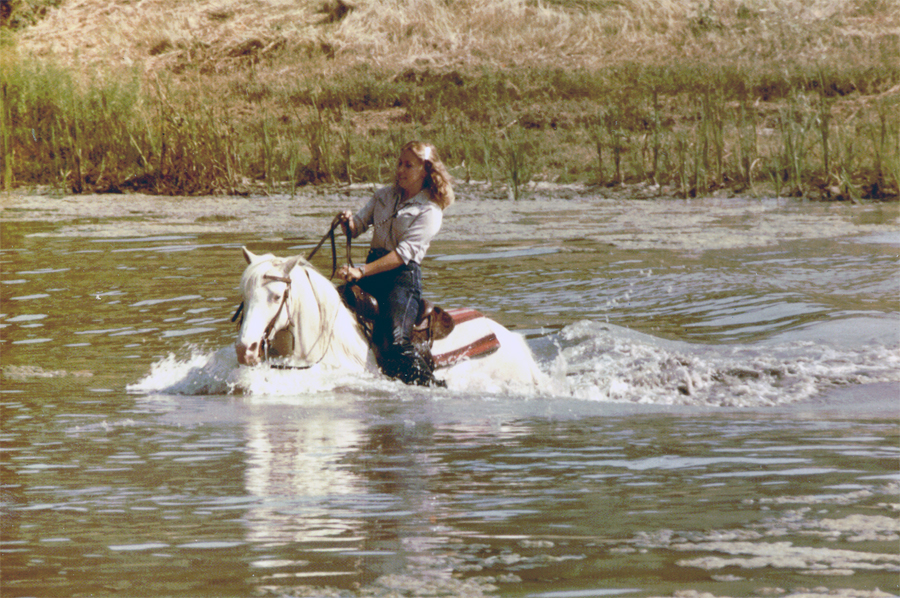 After the water race, the tired horses would be tied up to their respective trailers, given a thorough rub down and feed and then it was on to the Corn Roast and BBQ/Dance part of the evening.  The bed of a hay wagon would be placed in the corral  which  became the dance floor.  Country music blared over the sound system (the only times I tolerated or even LIKED country music), hundreds and hundreds of ears of corn were boiled in a huge vat of water over a fire that were served along with BBQ’d burgers and hotdogs and plenty of cold beer.

We would be up until the wee hours of the morning dancing, partying and poking fun at the poor saps whose horses wouldn’t go in the water.  Everyone always had a great time and not everyone went home afterward, they either pitched a tent or slept in the front of the horse trailers or the cabs of their trucks.  It was a gigantic, country hoe-down party that was a TON ‘O FUN.

The Saddle Club closed down in 1994, and soon after that, I retired Lady as she was getting too old to ride.  But I was left with lots of great memories and happy that this city-born girl was able to spend so many years experiencing country living and enjoying the close-knit community of the ‘horse-people’.

I like to think I owe it all to Smoky the Cowhorse….

1 thought on “Smoky The Cowhorse”