After a very long, very cold and very snowy winter, we arrived at the Northern Homestead in balmy +6C weather grinning like a pair of fools.  Home at last.  A few thin clouds stretched across the northern sky partially obscuring the sun as it tried to cast its warming rays to the now thawing earth.  With the forecast heading up to +11C for the day, the remaining snow’s days are numbered.

We stepped out of the car and stretched, grateful the long ride was over and our legs were now free from the car’s confining cabin.  I grabbed my keys and headed to open the door of the cottage while hubby unlocked the garage.  On the way down the walkway, I surveyed my now visible gardens, which 2 weeks ago were still locked in Mother Nature’s icy grip under 2 feet of snow.  Small green tips from the lilies were peeking through the dark damp earth, finally coming awake after a long winter’s nap.  I grinned even wider at the sight of them.  Nothing makes me happier than seeing the first green sprouts of Spring.

I unlocked the door of the cottage and stepped inside.  Brrrrr.  With the furnace being off since we closed up January 5th, it was now warmer outside than in.  Hubby flicked on the power and set the furnace to heat.  It sprang to life with a hum before settling into a heating rhythm.  Next he headed down into the crawl space and switched on the heat tracing for the water line to let it work its magic before heading back to the car to help me unload.

We emptied the car of its contents but before I went in to unpack, I wandered the property surveying the mess winter left behind and to check the status of the bird feeders.  Both were empty. No surprise there though as I had filled them up 2 weeks ago on our last visit.  I am sure the seed supply didn’t last long with all the hungry avian visitors in the area.  As I headed up to the garage for the bucket of sunflower seed I noticed funny looking tunnels burrowing into the grass.  There were excavated piles of dirt here and there, mostly around the bird feeder located lakeside with a few tunnels over by the septic weeping bed.  Mice.  All winter long I had noticed tunnels in the snow, but didn’t think they would tunnel in the lawn as well.  More remedial yard work was in my immediate future.

With the birds fed and happy (they were at the feeders less than 15 minutes after I filled them) and the cottage warm enough, I went inside to unload the cooler, tote bin and small luggage bags.  30 minutes later the place was filled with food, clothes and necessities and it felt like I had never left.  As I stared out the window watching a small flock of Goldfinches monopolizing the feeder hubby was in the crawlspace trying to get the water line going.  I listened for my cue to turn taps on as he primed the pump and 1 1/2 hours later, water flowed from the kitchen and bathroom taps. Success at last.  Now I could finally use the facilities after the long drive and 2 Timmie’s Teas later.

I headed back outside to start on the yard work as with only being here a couple days, there wasn’t much time.  I grabbed the rake, wheel barrow and grass seed and proceeded to rake out the mice tunnels and re-seed those areas.  Next was to remove the pine needle mulch from my upper herb/flower bed.  I pile about a foot of pine needles in the fall on it to protect the bulbs and perennial herbs from the numbing cold.  After that it was on to raking the downed tree branches and winter windblown leaves, piling them into the wheelbarrow and dumping them in the back forty.  Once complete, the lawn was fluffed up like a thick, soft towel fresh from the dryer.

As I was about to head up with the wheelbarrow and lawn tools, the familiar chirping call of an Osprey caught my attention.  I looked up to see a male performing his Spring mating flight rituals to an oblivious female.  She soared away from him out over the lake ice, seemingly unimpressed by his flying acrobatics.  He continued calling to her as he soared over the trees and out of sight.

With the yard work done for the day, hubby and I sat on the deck in the sunshine watching the lake ice slowly melt around the edges of the dock and shoreline.  Soon we’ll be able to hear the sound of lake again as it has been noticeably absent since it froze last November. 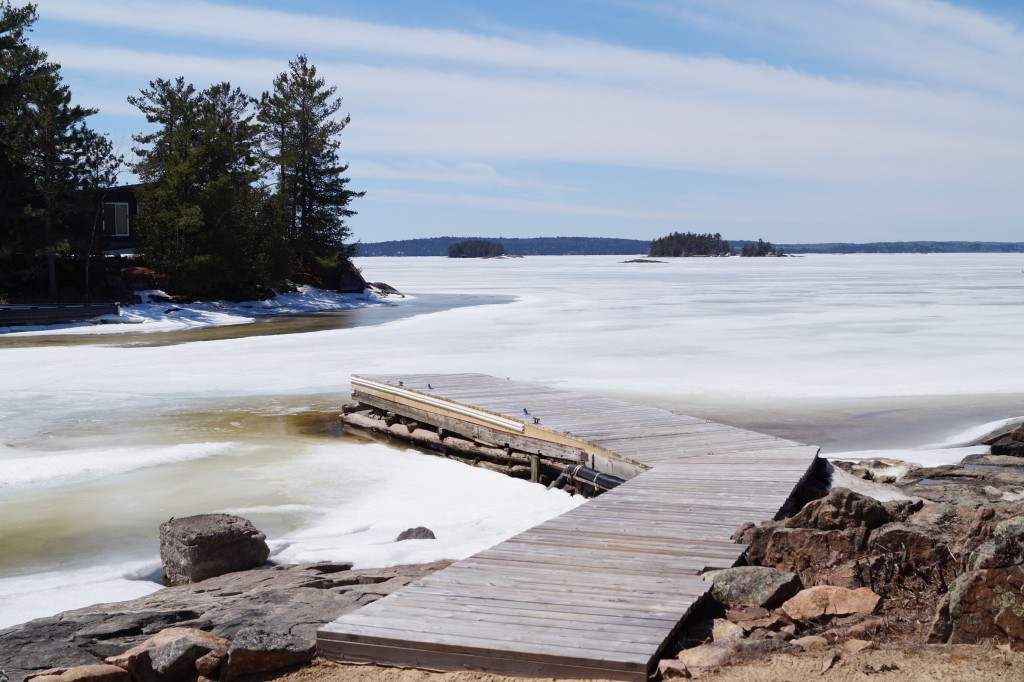 We sat in the deafening silence, cherishing our little slice of heaven and toasting the coming season.  May it be filled with warm sunshine, plentiful gardens and a whole lot of fun.