Ever have one of those ‘AHA!’ moments out of the blue?  I had one this past Monday.

After coming home from our trip to an empty fridge, I headed out to load up on produce and other staples, all the while, mentally planning what I was going to be making for dinners this week.  Seeing as I was still immersed in the sabores (flavours) of Mexican cuisine, I  was itching to keep my tastebuds south of the border(s) and trying to figure out what to make for dinner that night.

I ended up making nothing to do with Mexican cuisine.  I know, you are probably just as shocked as I was.

It all started earlier in the day with me rummaging in the freezer for soup, because it was minus ridiculous outside and I needed to warm up.  Not finding any, I hauled out some frozen containers of stock and got to work on the Madeira soup recipe that I really have come to love and can’t seem to get enough of.  So halfway through the making of the soup, before I put the broth in (see recipe link above) with the tomatoes, spices, onions and mushrooms simmering, I had my ‘AHA!’ moment.

I had settled on having broiled salmon for dinner, along the lines of something Mexican flavoured, but a thought popped into my head….quinoa, I had not made any in quite some time and it is a great side dish for salmon with a salad.  So what is the ‘AHA!’ moment you are wondering?

I scooped out a cup of the simmering soup base (with the onions, mushrooms, et al) and set it aside to be used to make the quinoa with in place of plain water.

THAT was the ‘AHA!’ moment.  If I could figure out a way to make a scratch ‘n sniff spot on this screen so you could smell the wondrous aroma while the quinoa cooked I would.  Unfortunately, that type of technology hasn’t arrived yet..maybe I need to work on that and become a billionaire…mental note…work on scratch ‘n sniff thingie for the internet.

So instead of being able to sniff it, I will give you a visual… 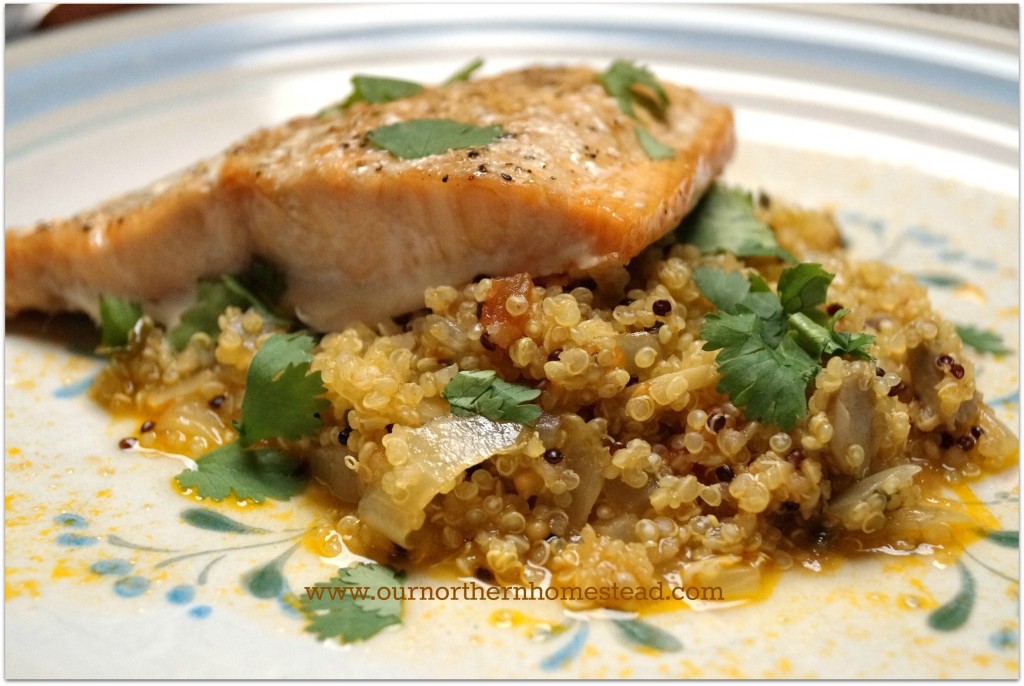 If you have never tried quinoa, shame on you, if you have and have just used plain water or vegetable broth, then you need to bump up the flavour meter as Guy Fieri would say and try it with a soup recipe like the Madeira.  It was simply outstanding and something I will be doing from now on when making this ancient grain.

This was one of my better happy experiments…some have been downright failures, but those are for another day.