I know I said I would be *back* here Monday, but between mountains of laundry and work/house catchup, it took me longer to get some time available for writing.

This morning’s quickie post has me whining just how !@#%&!! cold it is outside here in the land of the Great White North as all it does is have me pining for the place I left behind on the weekend.  I guess it really makes you appreciate, no covet, the days spent frolicking in the sun and the sand.  I am still putting together a post about the trip, so your patience is greatly appreciated while I juggle several different barrels of balls…it’ll come by the end of the week… I promise 😉

The past 2 days I have also done some experiments with food, seeing as hubby is back to working away from home 5 days I week, I become the guinea pig…which I love doing as he really doesn’t like the stuff I like to experiment with.  So dinners on Monday and Tuesday were fun, more on those later this week and next.

I also was asked to do a quick sewing project for a coworker of my daughter, that will also become a future post for you sewing/knitting junkies out there, and my other hobby, Bob the loom, is about to get *dressed* as he is naked right now.  A naked loom is an unproductive loom so a new project is on the horizon now that the first dish towels are done…oops, I forgot to post a pic about the first tea towel project, I finished hemming them just before I left for Mexico, so here they are, all done… 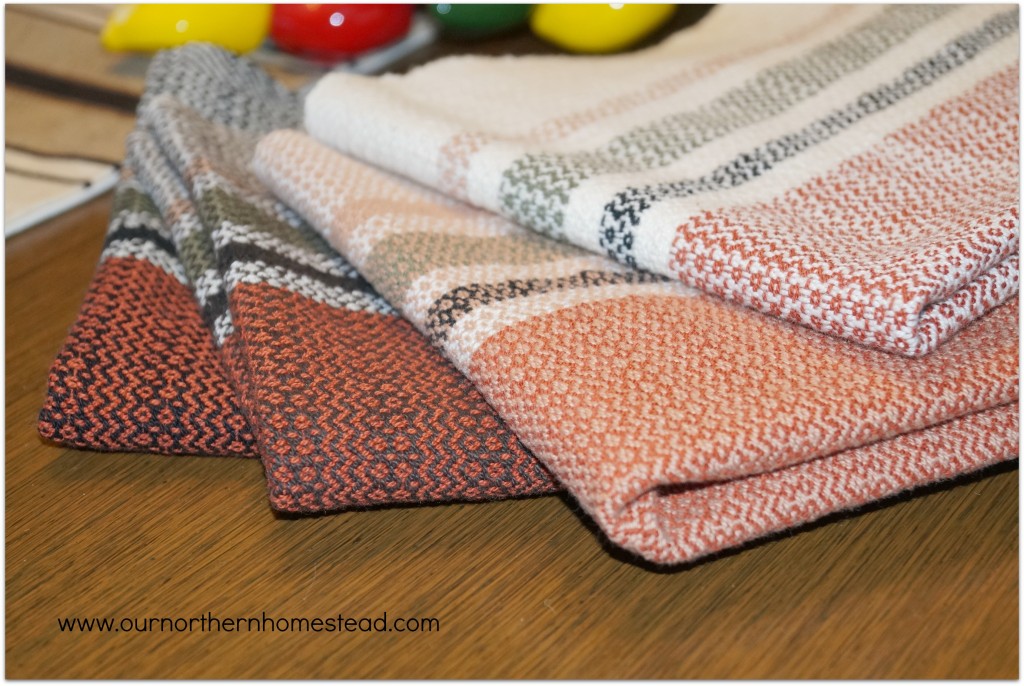 All 4 towels have the same colours running in a striped pattern from top to bottom (these are called the warp threads), and by using different coloured weft threads (side to side), each towel develops its own personality.  The top one I used a natural coloured yarn, the next, a cinnamon colour, then chocolate brown, then black.  They did shrink a bit more than I anticipated, but still turned out well and will be a nice addition to my kitchen.   The learning curve is huge, but definitely fun!

Meanwhile, with the *Spring* real estate market under way (unfortunately for this blog and what I would like to devote to it) it will require the majority of my time, so bear with me over the coming months if I am not very regular with posts.

That’s about it for now, stay tuned and more importantly, stay warm until Mother Nature gets the ice out of her veins…

3 thoughts on “A Little Bit Of Everything”