How many things have been invented over the years that have actually come about from either a mistake, or the crazy notion that putting two seemingly oddball things together just might be the next best thing since the day someone dunked a hunk of chocolate in a jar of peanut butter.

I had that revelation today after heading out to the garden and picking the first 2 Poblano Peppers that were ready, and as I looked at the Poblanos, dinner popped into mind. 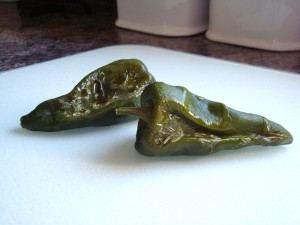 Chiles Rellenos (pronounced Chi-leys Rey-yeh-nos) are an extremely popular Mexican dish that is not only packed with a ton of flavour, but there are as many different renditions of this dish depending on the region of origin.

The ‘traditional’ method of making Chiles Rellenos is to stuff already roasted, cooled and deseeded Poblanos with a cheese and/or meat mixture, breading and deep frying them, then serving them with an enchilada sauce and sour cream.

Delicious yes, fattening…you betcha.  Not great for the arteries either.  So what’s a girl to do that is concerned about keeping her ‘girlish’ figure and her arteries flowing?  Do what I do best.  Which is to re-invent/modify/tweak a recipe until it comes out like I envisioned.

Today was just such a day.

As I was pondering on how to make the Chiles Rellenos without the breading and frying, it finally hit me.  Why not use low-fat whole wheat tortillas and stuff them with the roasted poblanos and cheese and then roll them up…enchilada style?  Ding – Ding – Ding!

This idea had fantastic potential, usually my first tweaking ideas are duds.  But I thought further…hmmmm… I adore Jalapeño Poppers as well so why not use the cheese filling of a Popper and spread that as a layer on top of the poblano that is on the tortilla and roll it up?

Talk about an idea steamrolling.  So this is what I came up with:

Roast the poblano peppers in a 350°F oven for about 25 minutes, turning a few times until the skin is blistered.  Remove and let cool in a plastic bag for about 10 minutes.  Slice the Poblano from stem end down to the point on one side and cut around the stem, peel away the skin and core.  Open like a book and scrape out the seeds.  Set aside. 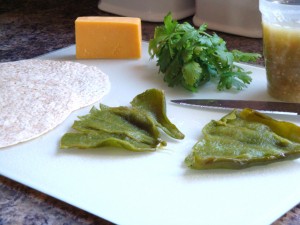 Combine the cream cheese and shredded cheddar cheese in a small bowl; set aside. 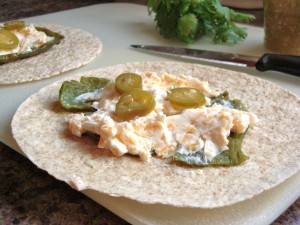 Place a warmed tortilla (zap in the microwave for 15 seconds) on a plate, lay one of the poblano pieces in the centre of the tortilla.  Spread half of the cheese mixture over the roasted pepper on the tortilla.  Top with 3 slices of pickled Jalapeño peppers. 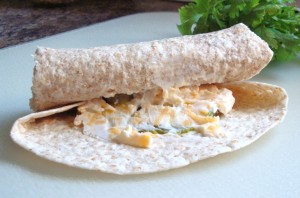 Fold two sides of the tortilla towards the middle and then roll the tortilla up.  Place seam side down in a casserole dish.  Spoon the Tomatillo Salsa overtop of the enchiladas.  Cover and bake in a preheated 350°F oven for 20 minutes.

This ‘tweaked’ Chiles Rellenos rendition of the classic turned out fantastic.  I can not wait to  make it again.  This will definitely be added to my Vegetarian Collection, as I think my daughter will enjoy them immensely.