Yup, this is another blog post about toe smotherers….first, let me preface this by saying that I have not, nor will I ever become a lover of socks, more like…I may actually tolerate them from this point forward now that I have completed 2 knitting torture projects.

Torture project # 1 if you recall was for my daughter.  She loves socks, loves them so much she always has to have a gift box full of them under the Christmas tree every year.  So it made sense that my first foray into attempting to knit a pair would go to her.  Here is how hers turned out… 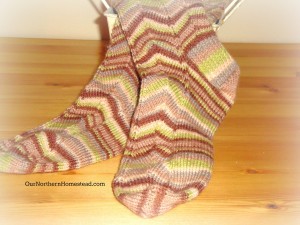 Next up, I decided to make a pair for myself…which I kept wondering why I was doing it because, as you know by now…I really hate socks!  I much prefer flip flops and dressy sandals or just running around barefoot, but the stones on the sidewalks and roadways often necessitate something more than bare feet.  There is also a season called ‘Winter’ here in the Great White North that plays into me not wanting to lose my digits to frostbite.

So… in between the knitting projects that were already on my plate and more ideas dancing in my head, I started a pattern of a very basic ribbed sock.  If I was going to continue down this road of producing a pair once or twice a year (for said daughter), it was better to choose a simple pattern to not stress about and gain confidence in actually making them.

The easiest part about making socks is starting and then just humming along going round and round and round and round…until you fall off the la-z-boy from dizziness.  Then…..WHAM…it is time to knit the Heel Flap,  followed by Turn The Heel, which may have some people wondering if they have found themselves thrown into a Square Dance competition…but….if you take the time to read a sock pattern from start to finish (hahahaha!) and scope out any on-line tutorials, then you should be able to follow along, unless you just fell off the sock-knitting turnip wagon…like me.

After numerous emails to an SKP (Sock Knitting Pro ~ yes, she is one of many that DO exist in this world), she answered my many questions and encouraged me not to give up, so I persevered and managed to complete a second pair of toe smotherers….which makes me wonder….

and technically, I had them on for the 5 minutes it took to take the above photo…
Does that count?

1 thought on “Anatomy of A Sock”