I don’t mean burning toast in the toaster, or dropping an egg on the floor….Those are trivial nuisances that go hand in hand with learning your way around a Kitchen in your early Adult Years.

What I want to know is, what was your first full-blown, almost burned the house down or chopped your finger off with a Ginsu knife bad experience?

I want to hear your stories, cause someone out there has to have a story just as bad as mine and I would hate to feel alone in my embarrassments.

I actually have 2, the very first one not being that bad, but more funny (and rather messy) than anything else.

My husband and I had just started living together (yes, living in sin, we did so for 2 years before we made it official, so this was sometime back in 1979) and my brother was also staying with us after he moved back from Northern Ontario and figured he’d sponge off his sister for a while (I still love him very much even though he almost ate us out of house and home) before he landed a job.

ANYWAY, I decided to bake potatoes in the oven to go with dinner (and for some reason, I can NOT recall what the main dish was??).  After about 45 minutes of them being in the oven, we hear this muffled ‘BOOM’ sound coming from the kitchen.

Well, my brother keeled over laughing as he knew right away what it was (apparently he did the same while living with our Aunt & Uncle up north), me, I just looked at him and said ‘what’s so funny? Do you know what that was?’….

He couldn’t stop laughing, he managed to blurt out… ‘Open the oven door and see’…

So I head to the kitchen and open the door….and….  one of the potatoes was blown apart to smithereens (I like the word smithereens, somehow it is the perfect word for this story) all over the inside of the oven.

Apparently I forgot to ‘prick’ the potatoes to vent the pressure.

What a friggen mess.  It took me forever to clean it up, especially since I had to wait until after we were done dinner and the oven cooled down and by then it was little black bits burned onto everything. I am sure my brother still giggles to this day about his sister’s early cooking attempts…

Now on to the REALLY embarrassing story…the one I eluded to at the end of my “About Me” page when I first launched this site.

It was in the mid-1980’s and we had just moved to Burlington from Hamilton.  My In-Laws were having a new townhouse built that was to include all new appliances and they were having one of the newly invented built-in Microwave/Fan combo units being installed so they gave us their old microwave to use as it was still good and we didn’t have one yet.

This thing was a monster.   It was bigger than the kitchen, bigger than Noah’s Ark even…no really, I swear…and I believe one of the first ones ever made in or around 1812.  Hubby’s Grandpa couldn’t go near it with his pacemaker or who knows what would have happened to him.  His Doc told him to stay away from all microwaves.  So he did, bless his heart, it was probably the only time he listened to his Doctor….

The first week we had this wondrously ginormous time-saving invention, I thought to myself, why spend almost an hour cooking carrots on the stove when I could use the microwave and cook them much, much quicker!

So I get out one of my corning ware dishes (with a glass lid) and put some chopped carrots and water in it, put the lid on and popped it in the microwave.

I set the timer and then went out back to see what the kids were up to in the yard…. Next thing I know, hubs comes out and says…’what do you have in the microwave? It has been running for an awfully long time and I smell something burning’…

We run into the kitchen and holy smokes… I couldn’t believe my eyes.  The glass lid of the corning ware dish was MOLTEN, yes, MOLTEN and melting INTO the corning ware dish!  The carrots had become little, black charcoal briquettes in the bottom of the dish (BBQ anyone?)

Apparently I set the timer to 1.5 hours instead of 15 minutes on full power.

Talk about Nuclear accidents…This was almost on the same scale as Chernobyl… or Three Mile Island…ok, maybe not, but it really was almost as scary.

So I shut off the microwave and went to open the door, hubs said ‘NO! leave it closed!’…he knew what was coming, the disaster was yet to be over.

Within 2 minutes of it cooling down, the glass lid shattered into a gazillion shards like it was hit by a bullet.  JEEZ! Smart man I married.  We would have had shards of glass ALL over the kitchen and we would have been instantly acupunctured to boot.

He, nor I will ever forget this for the rest of our lives…me, chef extraordinaire NOW, melted a glass lid back in my early cooking days.

Miraculously, the dish itself was fine, just the lid was ruined ~ FYI, the melting point for glass is somewhere around 2,500 Degrees FAHRENHEIT!  All I can say is when I do something…..go big or go home!

To this day, I still have that little square corning ware dish and use it quite often…it just doesn’t have a lid anymore, and it isn’t allowed back in the microwave either…no sense tempting fate again. 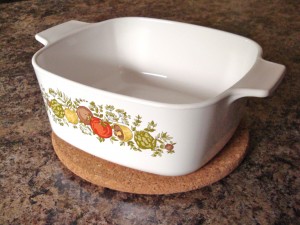 So that’s my Kitchen Disaster story… and I am SO looking forward to hearing yours.  Please make sure you leave a comment telling me your saga as there is a prize for the WORST, SCARIEST Kitchen Disaster Story, and no, the prize isn’t a new microwave oven!

The winner will be chosen next Tuesday, June 8th….so…what are you waiting for?  Fess up!

7 thoughts on “What Was Your First……Kitchen Disaster?”