Yes, it is quite easy to ‘Shock’ your plants in preparation for their final place in the garden.  There is a transition period whereby you slowly ease your plants into the great outdoors a little at a time to get them used to the harshness of the world.

When plants spend time in your sunny window in the early spring or under grow lights, they are shielded from the burning rays of the sun that can scorch their delicate leaves and stress the plant.

To acclimatize them to the outdoors, start by taking your plants outside to a shady spot, shielded from the wind for about an hour or so on the first day.  Ideally, the outdoor temps should be at least 15C or above.  The next day, let them spend about 2 hours.  Gradually, over the course of 1-2 weeks, keep them outside longer and longer until they are ready to spend the night outside (temperatures allowing).  Keep an eye on them though during this transitional time so they do not get caught up in an early spring storm….as did happen to me yesterday.

I was out running errands and before I left, I placed all my charges out under the large patio umbrella we have and the skies were blue, sunny, with a few puffy’s floating on by.  That apparently did not last long….soon I realized the skies had become cloudier and darker and the wind had picked up…damn I thought, storm is brewing.

Sure enough, next thing I know, I am in a raging torrent of rain and wind (the car radio had reports of hail in the next city over) and I was frantically trying to finish my errands to get home to ‘rescue’ my babies (yes, you too will soon think of your seedlings as your babies).

I get home and for the most part, they were ok, a little wet, but the umbrella and the shielded location in the backyard kept the wind from tossing them around….except for one tomatillo plant.  It obviously was in the wrong spot as the top half of the plant had snapped off…and with it…5 flowers that were on it.  Double Damn.

I left the pot in the living room.  Maybe, just maybe, it will recover on its own with new shoots.  I hope. 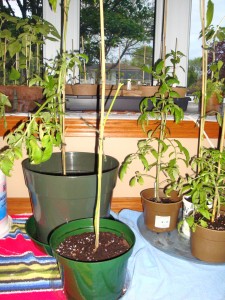 This is why you always plant way more seeds than you need, to account for life’s little tragedies.

1 thought on “Shock and Awe….Is Bad for Plants…”