Diary of a Homestead Vacation Continued…(see prior post here)

I need to preface this Chapter for my good friend Tina ~ please do not read this, it will only make you want to run for your duck recipe book…and your gun…

As I sat out on the deck in the afternoon tap-tap-tapping away on my computer, with clear skies and hopefully no return of the hot, hazy and humid weather that we have had recently, it was turning out to be a beauty of a day.

The lake was calm and quiet, with hardly a whisper of a breeze.  About a dozen ducks were busy on shore scrounging for every last kernel of corn I had put out for them that morning.

Suddenly, a loud and sharp quack broke the serene setting.  As I gazed towards the water, I witnessed a female Mallard leaping out of the water in a sudden and total panic, leaving her 6 fuzzy babies alone in the water.

She continued to quack frantically and flew around her peeps from one side of them to the other, splashing down and then taking off again.  Her babies just huddled together in the water, trying to stay still, heeding mama’s urgent warning.  The ducks on shore shot their heads up at the alarm call with some bolting for the water immediately while others just stood there, necks stretched out trying to see what the danger was.

I scanned the water and didn’t see anything.  Sometimes we get large bass or pike cruising the shallows of our inlet that have made them jump before, but this was different, the alarm call was unmistakable.  As I looked towards the dock, I spotted the culprit.

A dark brown, furry mink was running up and over the rocks of the dock crib and Mrs. Mallard had spotted him and sounded the alarm.  Mink look like ferrets (they are  from the weasel family), and are about the same size as a ferret too.  They eat just about anything they can sink their teeth into and certainly wouldn’t pass up the opportunity to snatch a fuzzy little yellow and brown duckling from an inattentive mama mallard.

With the ducks on high alert, the other mama ducks corralled their young peeps and headed out into the lake away from the danger.  4 adults stayed behind to finish pecking around for any stray kernels, but they didn’t keep their heads down for very long as they were keeping an eye out for the mink.  A mink certainly wouldn’t attack a full grown, healthy duck, but would prefer to go after a sick or injured one for an easy meal.  Luckily all the ducks at the Homestead seemed healthy.

The mink hung around for about a half hour, running back and forth along the rocks at the waters edge from our dock to the neighbours.   Curious as to what it was doing, I grabbed my camera and snuck down to try and snap a pic.  We hadn’t seen any mink this year yet and as I walked to the waters edge, one of the guests at the camp next door was paddling by in a paddle boat and had witnessed the whole kerfuffle.  I asked her if she saw the mink, she said yes, and that yesterday there were 3 of them running around the camp docks.  3? The duckies won’t be happy having a trio of peep marauders around that’s for sure….

As I approached the dock, I spotted the mink running along the side of the crib towards the far end, then it disappeared around the end beam.   I quickly scampered to the end of planked area of the dock and waited with the camera zoomed in.  Sure enough, he turned to head back and was about halfway along when he realized I was standing there.  He stopped in his tracks and stood high up on his legs on the rocks, staring at me.  I quickly snapped a pic before he dove over the side beam of the dock and vanished into the water. 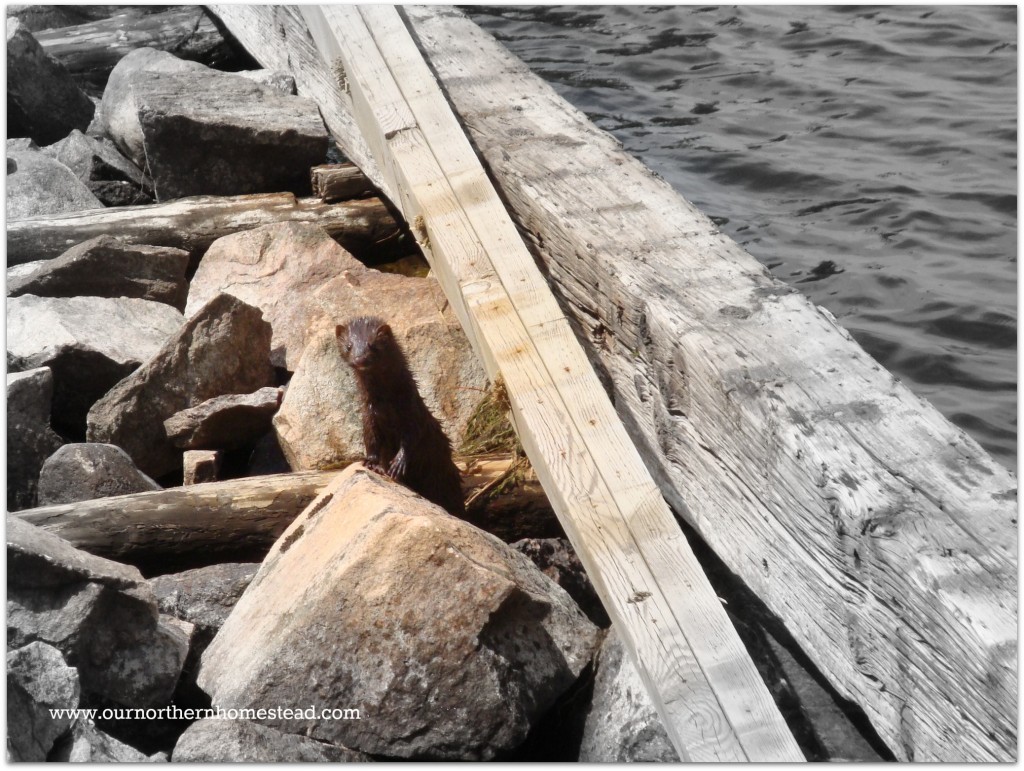 I walked back up towards the deck and the few ducks remaining onshore quacked as I went by, “yeah yeah” I said… “he’s gone, so shush already!”  Half an hour later the ducks were snoozing on the lawn, the ruckus that had happened not an hour before long forgotten. 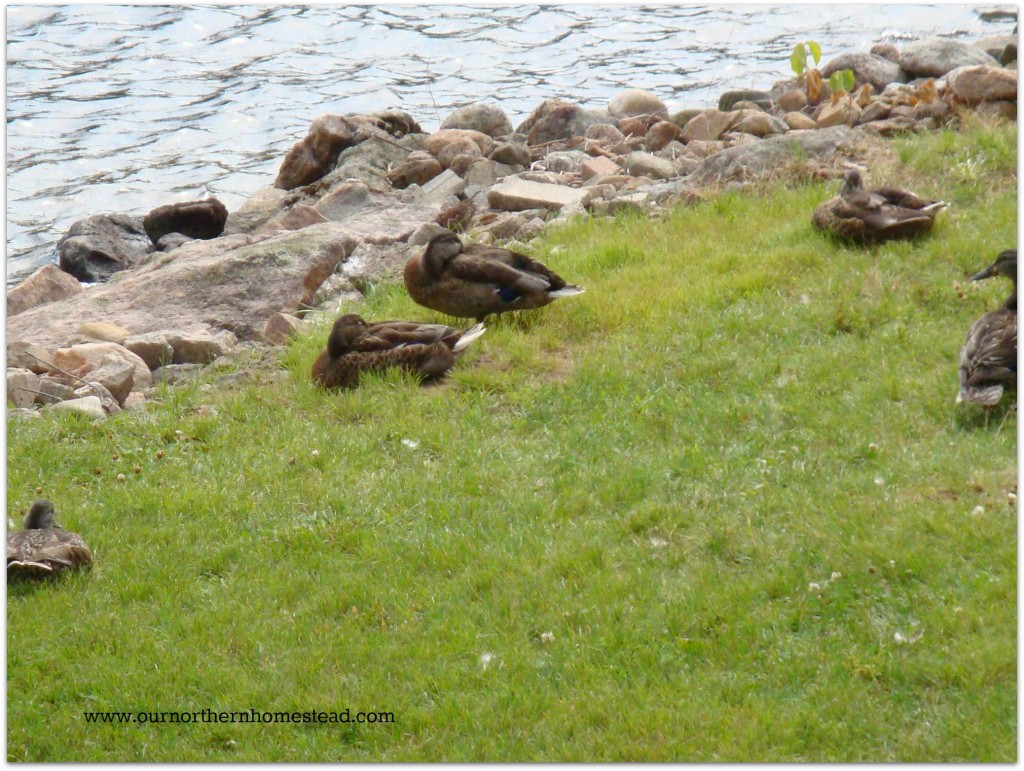 I went inside and grabbed a glass of water and then settled back into my deck chair to resume typing.  2 minutes had not gone by when I heard loud rustling noises coming from the blueberry patch at the side of our property.  Jeez, the chipmunks were chasing each other again, they just can’t seem to get along I muttered.  As I looked towards the blueberry patch, a head popped up for a quick look around.  It wasn’t chipmunks, but ducks. 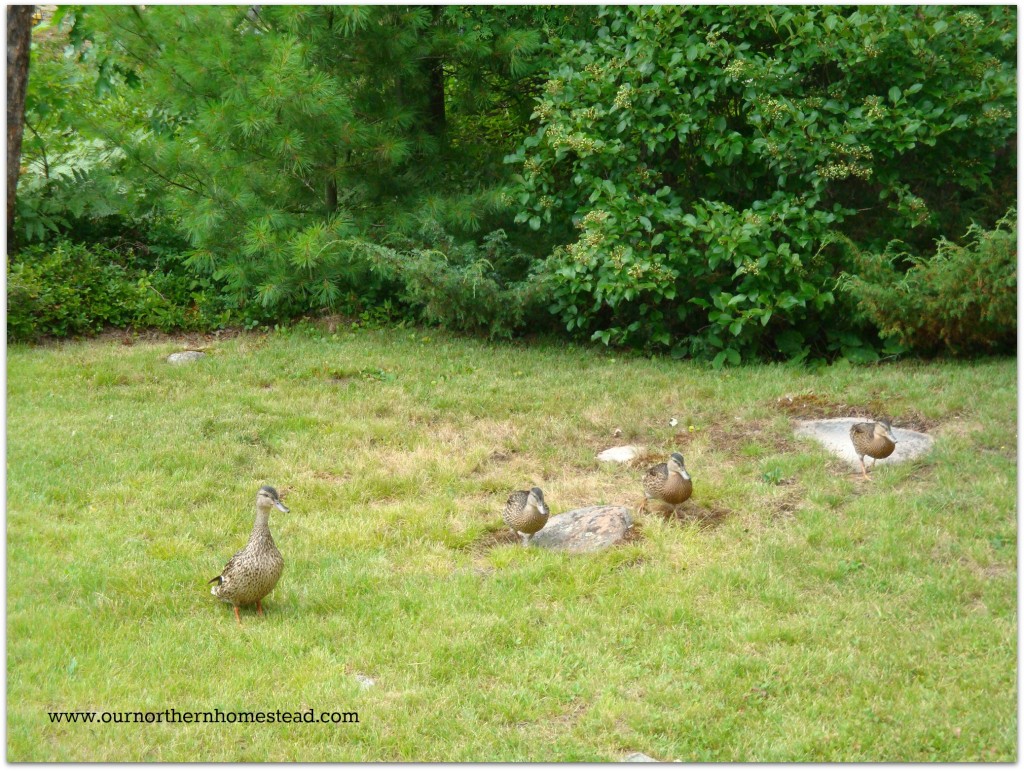 A mama and her brood of “tweens” were waddling through the blueberry bushes picking every ripe berry they could find.  They must have gone in there while I was inside as I didn’t see them come up from the water.  They rummaged around for another few minutes, and then headed back towards the lake for a drink, their crops full of blueberries and corn kernels.

These guys are certainly well fed I mused…  Speaking of being fed, it was time to start thinking about dinner….

2 thoughts on “Chapter 6 of the Homestead Vacation”