Last year’s wild blueberry season was a total bust.  I don’t think I even picked one full cup of the tasty, little blue pearls.  It was such a hot, dry early Spring that then stretched into Summer and the teeny flowers of the blueberry bushes never had a chance of being pollinated.   The poor plants just shriveled up and keeled over.

This year has been vastly different.  We have had pretty much perfect growing conditions and I suspect we are in for a bumper crop.  My Homestead neighbour who runs a cottage camp emailed to see if I wanted to go berry picking with her, which was perfect as hubby is 6’3” and he doesn’t bend very well to get at the bushes that are only a foot high.  So the next day we set off with our empty baskets, and me bringing along my floppy hat and 2 of our trusty bug zappers for…you guessed it…the dreaded deer flies.

The neighbour looked at the bug zappers (which resemble tennis rackets) with a puzzled look on her face…”what are those?” she asks… “bug zappers” I said.  Her being the new owner of the camp for only a year and half, she had not seen these knew weapons of mass destruction against deer flies (and other biting insects).

I said “trust me, you will need it when we get to Blueberry Hill”.  Which brought her to fits of laughter…”Blueberry Hill? I thought we were going berry picking, not to a Fats Domino concert”.

I just grinned as we headed down the road and then off into the bush.  We walked up onto a large, rock hill just under a half acre in size, basically, the Great Canadian Shield (which is what most of Northern Ontario is made of) studded with pine, spruce, birch and poplar.  At our feet, clumps and clumps of blueberry bushes that were sporting their powder blue gems in big, fat clusters.

As soon as we hunkered down at our first clump (clump being at least 10’ in diameter), the familiar buzzing sound was heard.  The deer flies had found us quickly and we were prime vampire snack material.  Out came the zappers.  My neighbour quickly got the hang of using the deer fly death tool, swatting every few minutes with the familiar ‘Crack!’ signaling a successful kill.  She giggled at the efficiency of the zappers… “I have to get one of these!” she said gleefully. 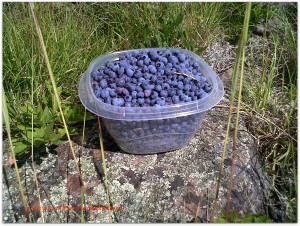 As we hunched over the small bushes, tediously picking in and around the branches in search of the tasty little orbs, we gabbed about anything and everything.  Want to get to know a persons life story? Go berry picking with them, you will have lots of time to cover just about everything.

After 2 hours in the sun and heat, with our baskets almost full, we headed home.  As we walked back, it felt good to stretch the legs and back out as berry picking takes its toll on the body.  Arriving at the Homestead, we plopped the baskets on the kitchen table and I grabbed a couple of cold, frosty beers from the fridge and handed her one…awwww….nothing beats a cold one after spending time out in the hot sun picking berries.  We gabbed for a few minutes more as we finished our cold brew and then  she headed home to squirrel her hard earned berries away from her ever hungry brood of 4 young girls.

I set about washing and spreading the berries out onto sheet pans lined with waxed paper and then popped them into the freezer.  After a couple hours, they are frozen solid and can be dumped into Ziploc bags without fear of ending up a solid blueberry mass.  I now have enough berries for at least one batch of my Spiced Blueberry Jam, tomorrow I would head back out to spend another couple hours picking to ensure I had enough to last me another year.

The rest of the day was devoted to my latest knitting project, a sweater… Yes, I know it is July and 30C out, but in the Northland, it is never too early to start on a Fall sweater…

2 thoughts on “Chapter 2 of the Homestead Vacation”