Even though the calendar says September 5th, it definitely feels like Fall has arrived.  I awoke this morning to a cold breeze coming in the window that had been left open a crack overnight.  Brrrrr, no wonder I slept so good.  Nothing makes for a better sleep than being snuggled deep under a warm feather duvet, breathing fresh, clear, cool northern air.  I don’t remember sticking my leg out the covers once, normally one hangs out all night during summer.

As I climbed out of bed, I peeked out the window to check out the lake.  It was noisy most of the night, the breeze had kept the water moving, lapping along the rocky shoreline and splashing up, over and through the dock, which still isn’t fixed yet from Mother Nature’s temper tantrum back in April.  Hopefully that job will be accomplished in the next few weeks as the water level will start to go down in anticipation of winter snow accumulation.

I walked from the bedroom towards the bathroom, jumping when my feet hit the tile floor, yikes, it definitely is getting colder out, the ceramic has returned to its ice cold state.  I quickly scampered back to the bedroom to find my thick, fuzzy slippers, returning to the loo before getting the kettle on for tea.

While the kettle brewed, I stripped the bed in the spare room, tossing the sheets in the machine hoping the sun was going to stick around long enough to dry them outside on the line.  The past couple mornings have been cold, windy and rainy, with the sun finally pushing the clouds out by midday.  The energy saved by using the sun and wind to dry the laundry is significant in the north, so I take advantage of nice days as long as I can.  The kettle whistled sharply, interrupting my train of thought.   I brewed my cup of tea, turning to stare out the window at the lake.  The sky is a brilliant shade of blue this morning with the water reflecting the same hue.  The flock of ducks that have been my companions all summer are shrinking in numbers, about half are left, bobbing in the water, waiting for me to bring the bucket of food down for them.  They waddle up and over the rocks as I head down towards the beach, scrambling to be first in line to get at the kernels of cracked corn and barley.  My morning ritual will soon end when they fly south for winter.

I turned to open the blinds of the patio door and was greeted by the sight of an empty deck.  It looks so barren now, yesterday, the vegetable planters were lined up like soldiers around the edge, now it lies empty save for the tomato cherry planter, mint and cilantro.   I was able to pull out the last of the leaf lettuce and baby beets from the planters yesterday afternoon, dumping the used dirt in the existing flower beds and washing out the containers before storing them for winter.

I returned to the kitchen to get breakfast going.  I am always starving first thing in the morning and generally do not last more than an hour and a half before my stomach is loudly demanding food….kind of like the ducks outside the window.  With the sun creeping higher and breakfast done, I hung the sheets out on the line and it was time to head out for a walk.   I grabbed a couple carrots from the crisper in case Shiloh and her pasture mate Sierra are out in their field, then pulled my fleece jacket over my head, laced up my shoes and headed out.

What a beautiful, crisp morning.  The suns rays filtering through the leaves of the trees made the woods seem ethereal.  As I walked down the road, the thick woods on either side were noticeably silent, with only the crickets chirping and the breeze rustling the leaves of the poplar trees high up in the canopy.  All the summer warblers, thrushes and sparrows seem to have departed south.  In the summer, the woods are a deafening mix of chirps and cheery songs, but come this time of year, the woods fall silent.  The occasional Blue Jay or Nuthatch were the only creatures making themselves heard as I walked along.  Reveling in the peaceful surroundings, I realized the deer flies were gone.  Thank goodness, that is the only drawback for walks in summer, being sucked dry of blood by the pesky critters. 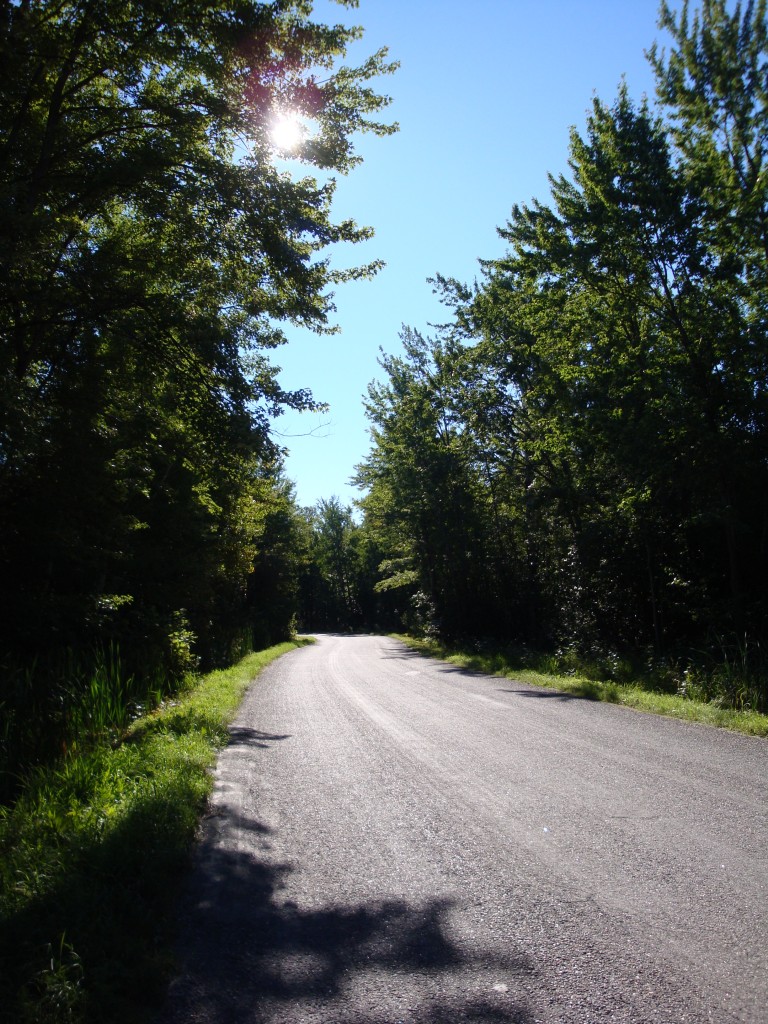 I rounded the bend approaching the horse pasture and sure enough, the pair of mares were out trimming the already short grass even shorter.  Their tails were hardly moving, another sign of the change in seasons, less flies mean less tail swishing and foot stomping trying to chase off the pests.  They were both on the far side of the pasture, I called to them and they both lifted their heads in unison, looking towards me, then settled back down to grazing.  Guess they don’t want their treat today, maybe they will be closer to the road on my return trip.

I continued around the next bend in the road and caught a whiff of smoke.  Someone has a fire going.  Most homes in the area have either a fireplace or woodstove to supplement home heating.  As I walked farther down the road, I reached the house with the smoking chimney.  It is an old, decrepit house, literally leaning in sections, with no hydro or running water.  Buckets line the porch and front of the house to catch rain water off the eaves and a woodstove being the only source of heat.  The people who own the property live somewhere else, but come out on weekends to tend to their vast garden located behind the house.  Tomatoes, corn, beets and who knows what else they grow, it is the biggest garden I have seen in the area.  I also want to know how they keep the deer from munching their way through it as there are no visible barriers to keep them out.  I made sure to protect my own garden bed from the wild grazers, preferring to keep my produce for myself and not feed the wild critters living in the area.

I reached the end of the road and turned at the stop sign to head back.  I looked at my phone, 30 minutes pretty much exactly to walk the distance from the cottage to the main road.  As I headed back, the occasional car went by off to who knows where.  The roads are not very busy up here once summer is over.  The annual pilgrimage of southern campers and cottagers thin out considerably, leaving only the locals to enjoy the change in season.

Shiloh and Sierra were still farther back from the road when I walked by on the return trip.  Oh well, the carrots will go back in the fridge until tomorrow, maybe then they will come to the fence for a treat.  Before Shiloh received her stable mate, she was a very lonely critter.  Anytime anyone walked by or even drove by, she would race to the fence to greet them.  Now that she has a pasture buddy to play with, she looks upon us disdainfully as common folk.

The rest of the walk back was uneventful and quiet.  The poplar trees are still sporting green leaves, but the maples are showing a turn in colour, soon the woods will be filled with vibrant shades of reds, oranges and yellows, which will then give way to the monochromatic shades of winter.

Ugh. Winter.  Another change in season I am not looking forward to….

4 thoughts on “A Change of Seasons”