I love leftovers.  In a pinch, they are a quick meal heated up the next day, but they also have tremendous experimental appeal for the adventurous kitchen types.  I am just such a type.

The other day we had shredded beef tacos with rice for dinner and I was left with about a cup of brown/wild rice and about a cup of the beef in BBQ sauce to ponder what to do with for last nights meal.

I didn’t want tacos again so grabbed a couple frying pans and some veggies from the fridge and got to work.  I also had one plantain left that was getting too ripe to be successfully sliced and baked into chips, but would work awesome sauteed with some butter and olive oil.

I sliced up some green pepper, half a jalapeño, some green onions and a couple tomatoes.  I sauteed the onions and peppers for a few minutes in some olive oil, added the tomatoes and leftover rice with a few shakes of ground chipotle chile powder, not enough to blow the roof of your mouth off, but enough to give it some zing and flavour.  Add some fresh cracked black pepper and sea salt and that dish was pretty much done.

The beef I just reheated, but the plantains were actually the star of the show.  I sliced the plantain on the bias and tossed the slices into a hot skillet that was sizzling with a pat of butter and olive oil.  Cooking over medium-low heat, turning often until both sides were crispy and brown, I then drained them on a paper towel and plopped them on the plate.

I heaped the rice mixture onto the plate topping with some fresh chopped chives along with the reheated beef.  It ended up being a very tasty dinner utilizing random ingredients from the fridge to supplement the leftovers.

I now wish there were leftovers of the leftovers! 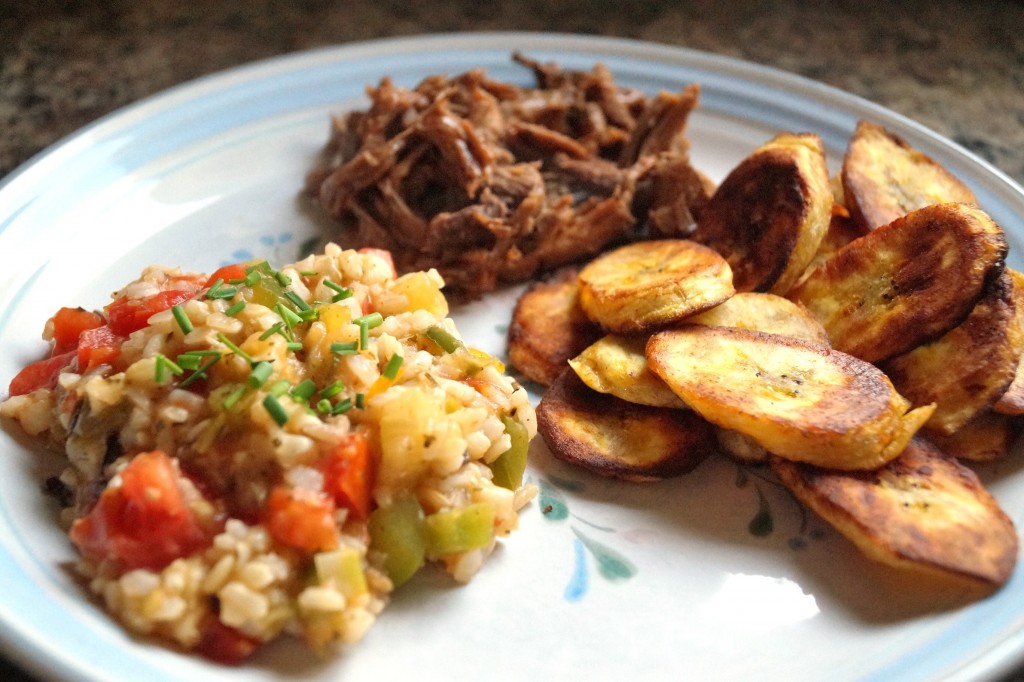