I am so very grateful this morning.  Grateful that it is actually Monday.  Monday should be called the ‘day of rest’, not Sunday.  Hubby and I hurt in so many places, every time we move even a pinkie we both wince.  Watching us get up from a chair, you would think we were in our 90’s.  What is wrong you ask?

The weekend forecast called for clear skies, plenty of sun and temps in the range of 22C to 24C.  Not too hot, just about perfect weather for climbing up on the garage roof to strip off the old shingles and install new ones.  We did the roof of the cottage last year, and we were really hoping to get another year out of the garage roof, but no such luck.   It was looking in rough shape, so best be proactive before we end up with an unwanted shower feature inside the garage.

Hubby said I didn’t have to help this year, but I felt a little bad for him up there by himself, not to mention, drinking a cold beer in front of him when he couldn’t have any until he was done on the roof for the day would be mean.  So I rummaged for some  clothes I could trash (remembering what happened to my favourite capri jeans last year) and headed up on the roof to help out.  Yes, roofing won out over making pasta sauce as hinted at in my last post. 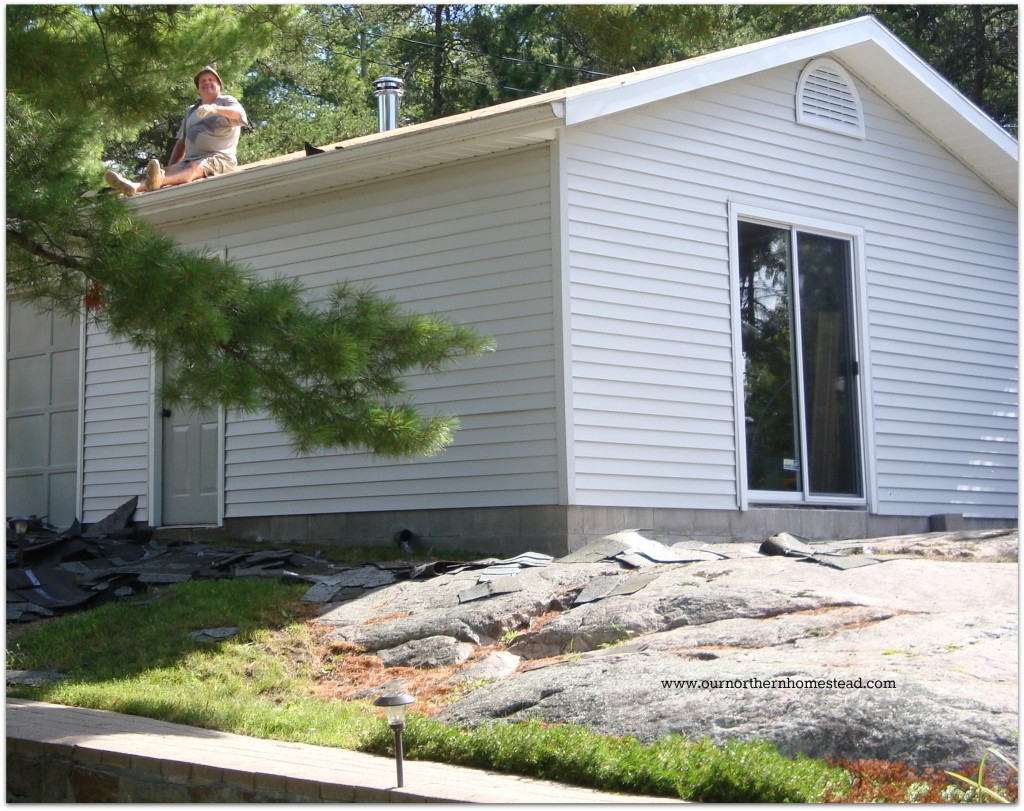 We started on Friday and completed one half of the roof that day.  That’s hubby up there smiling as he was stripping the shingles off, by the time we climbed down at the end of the day, that smile was no where to be found.  We were so exhausted, we could barely walk to the fridge to get that cold beer.  I couldn’t wait to pull off my running shoes, peel the socks off my feet like banana peels and walk into the lake.  You could almost see the steam coming off my feet as I dipped them in the water. Ahhhh…heaven.

We scrounged up enough energy to make dinner, then hubby graciously helped me with the processing of the pasta sauce.  I had left the peeled, chopped tomatoes to drain in a colander all day, so they were ready to get cooked down into sauce, then into the canner for processing.  After that, we sat out around the fire, desperately trying to keep our peepers open to enjoy the beautiful evening.  Which didn’t last long, we put the fire out, showered and crawled into bed to hopefully fall asleep before the aches started.

The next morning, we both groaned as we tried to get out of bed, sheesh, who would have thought roofing can be so tough on the body?  There wasn’t a single muscle that didn’t loudly object to being moved.   Once breakfast was done, hubby headed back up on the roof to strip off the other side (which took him better part of an hour) while I peeled and chopped another 50 tomatoes to drain for the day.  I then joined him on the roof for phase 2.

While up on the roof, hammering away trying not to hit my fingers with the hammer (I still hammer like a girl) I look down to see 3 ducks waddling up the walkway.  Apparently they think it’s lunchtime.  On my next trip down the ladder to get another bottle of water, I grabbed the bucket of cracked corn out of the garage and dumped a scoopful for them, which they devoured in short order.

About 4 hours later, with my part done, I climbed down the ladder and headed inside to prep dinner while hubby finished the ridge cap down the middle of the roof.  As he climbed down the ladder, you could see the relief on his face….thank goodness the job was done.  After a well deserved frosty beer (or two), he cleaned up the tools and supplies while I started walking around the garage searching for wayward roofing nails.  We have a piece of metal conduit about 5′ long that hubby put a round, coin shaped magnet (a pig magnet) on one end of the pipe.  I then wander around waving it just off the ground collecting nails that came off the roof when he stripped the old shingles.  Amazing how many you find, and with it being the garage, even more important to find them all on the gravel driveway before you drive over one and flatten a tire.

After supper, we had another short fire before crawling into bed, not before topping up on Tylenol and Ibuprofen to quell the aches enough to get to sleep.

Sunday dawned clear, but soon the skies were darkening off to the west with the low rumble of thunder being heard from across the lake.  Damn, we had piles and piles of old shingles to be taken to the dump, hopefully the rain holds off long enough.  No such luck though, we were able to get about 2/3rds the pile taken to the dump before the skies opened up.

I think that was a blessing actually, as hubby ended up being able to sit and relax for the afternoon while I finished a third batch of pasta sauce in the canner and finally sewed the buttons on the sweater I had been knitting.  With supper done and cleaned up, it was off to sleepy land for hubby as he was getting up early to head back to work tomorrow, while I was looking forward to Monday and a day of rest.

With the crazy weekend behind us, today I only have to go get more spring water, make peach~jalapeño jelly and clean the cottage….much better than climbing back up on a roof, hammer in one hand, a pouch of roofing nails tied to my waist and trying to convince myself it is the best thing in the world to do.

Monday’s are great aren’t they?