Ok, no actual beer was handy, so I made do with a glass of water.  I know, so unlike me.  Anyway, I wound a bobbin with yarn and popped it inside the shuttle.  With my feet at the treadles, I pushed each one to make the frames lift in turn, watching the yarn in the heddles being pulled up and down.  I marveled at Bob, this ancient technology that sat before me.  Who could have dreamed up such a thing so long ago?  Definitely a pioneer thinking outside the box.  Same as the person who came up with the combustion engine or the ghetto blaster…. My hats off to these super-brainers.

The first step in weaving is to secure the ends that are tied onto the front apron, then make a header so your weaving doesn’t unravel at the front end when it is finished.

This was definitely harder than it looked.  Especially when the book showed nice, glossy pictures of a beautifully even header.  Ha!  Me on the other hand, I could have hog-tied a calf quicker.  Without a rope.  Once I secured the header, it was time to ‘weave’… I pushed treadle # 1, which opens the shed, the shed is the space created in between the lifted yarns so you can pass the shuttle of ‘weft’ yarn through.   Then you pull the beater towards you to compact the weft.  While the beater is pulled forward, you push treadle # 2 to open the shed in an alternate pattern and pass the shuttle from the left back to the right, then pull the beater down again….and that is the sequence, to be repeated forever, or until you run out of yarn in your shuttle. 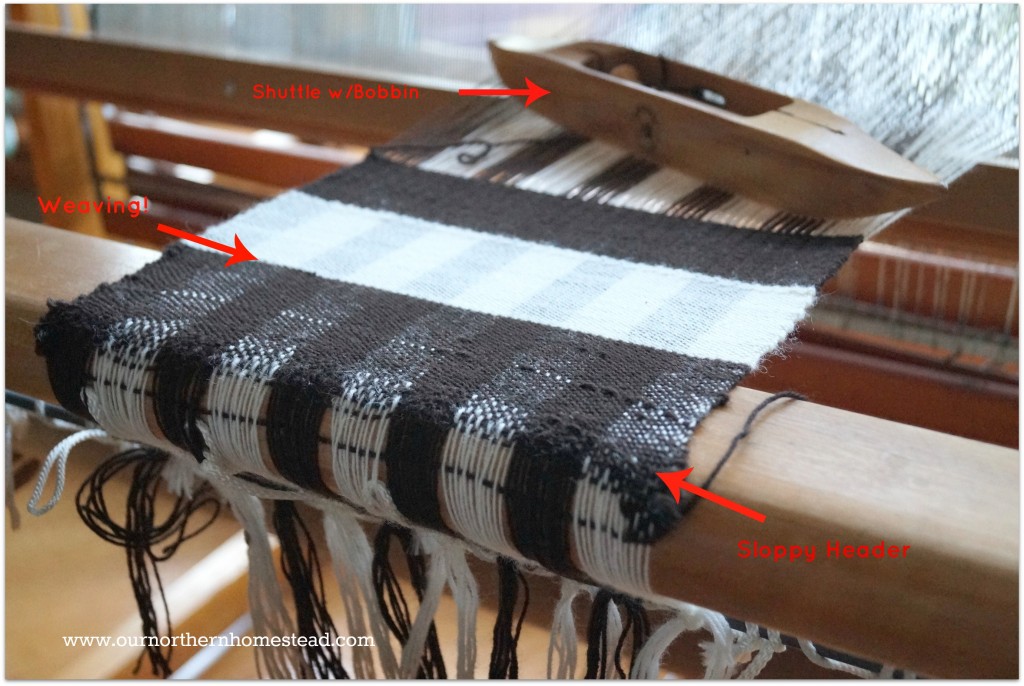 My first couple inches of so-called weaving was atrocious.   Trying to get the selvedges even was trying my patience.  I was either drawing the yarn in too tight so that the sides of the fabric were pulled in in an hourglass shape, or I had acres of spare yarn loops hanging on each side.   ARGH!

After a couple more inches, and some really intense concentration, I finally had something that could actually be called fabric.  I motored along until dinner time, weaving a total of about 9 – 10 inches, changing the treadle pattern halfway through from a plain weave to a twill weave, which ended up looking nothing like a twill because I think I hooked up the treadles incorrectly…. I believe I just created a new pattern.  I will call it Hidden Twill.  Can you find it?  It the top most portion of the fabric, all in dark brown, not the pretty diagonal brown/cream lines a Twill is supposed to be.

As the old saying goes, practice makes perfect, so I will be using up stashes of leftover yarns to play around with and develop a smooth rhythm before commencing with an actual project.

I have plans to make tea towels first as they are the easiest, as one can never have enough tea towels in the kitchen, and if they look crappy, well, they are just in my kitchen and no one elses.  From there, a scarf or two, maybe some placemats…and a rope to tie up that calf….

I hope Bob is patient with me…..

5 thoughts on “My First Weaving Project”