How Many Cookbooks Is Too Many?

I can’t be the only one with a fondness for collecting cookbooks.  Over the years, I have amassed a bundle, enough to start my own bookstore even.  One side of the store would feature cookbooks, the other would be devoted to the fictional works of Tom Clancy, Robert Ludlum and  Clive Cussler (those would be my hubby’s fav authors).

Pretty much at least half the cookbooks I own I purchased myself or were given to me as gifts, but the remaining half were handed down from my Grandmother after she moved to a nursing home and no one else wanted the many that she had collected as well (see? this love of cookbooks is totally hereditary, I swear).

I have cookbooks for Desserts, BBQ ideas, 1001 uses for Chicken, Breads, Soups, Salads, Vegetarian, Pasta, Mexican cuisine (probably the largest collection within a collection as I love all things Mexican), Spanish and Italian cuisine and even have one devoted to the best thing ever invented…

But the cookbook I treasure most is one that was given to me as gift by my Aunt back in 1991.  She obtained it from somewhere in Manitoba, the often referred to Ukrainian bread basket Province in Canada.  More Ukrainian’s settled within Manitoba than any other Province from 1891 to 1914 and more still after WW II. 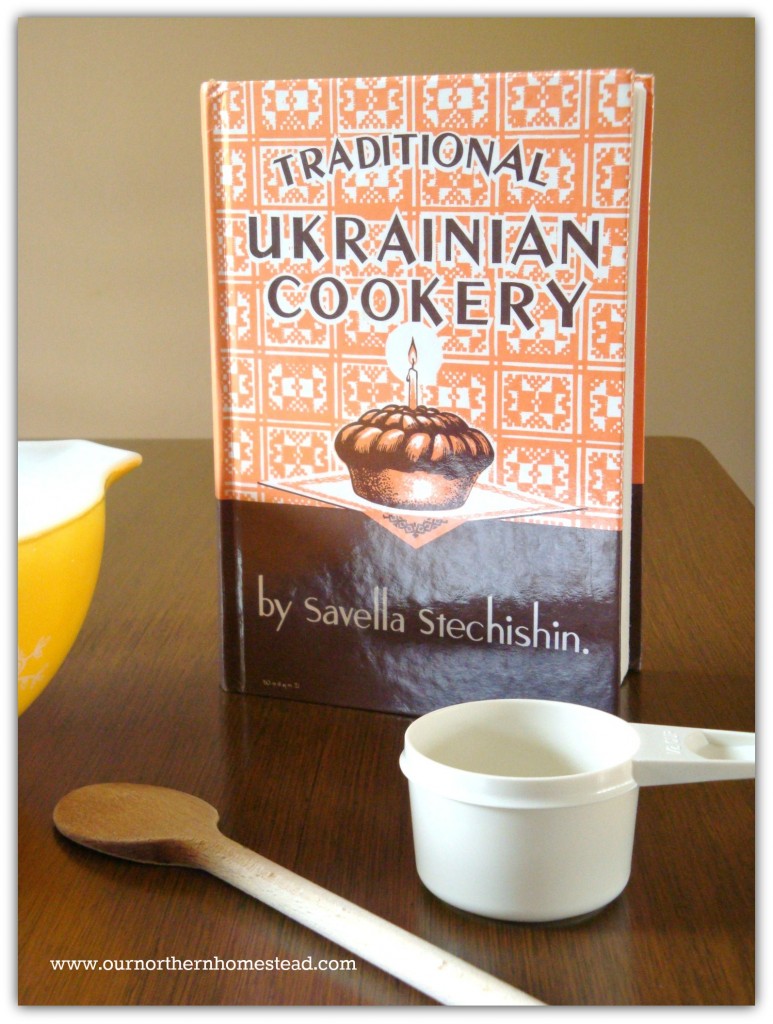 This cookbook has recipes, traditions and culture detailed with such clarity, even if you are not Ukrainian, you will appreciate what the pages of this book have to offer.

Not just recipes for the staple perogies (varenyky) or cabbage rolls, but mouthwatering bread recipes, interesting dessert concoctions, side dishes by the dozens, main course meals as well as soups and stews.  Now if you are up to experimenting with nose to tail cooking….Well, let’s just say that there are a lot of recipes that feature the less often used animal parts…. me, I skip over those, I may be of Ukrainian descent, but I am not sticking a pig’s brain or eyeball into anything remotely considered food for my hubby and I.

One of my favourite recipes in the book though is for pancakes (called Mlyntsi in Ukrainian), I know, pretty mundane, but it makes the lightest and fluffiest pancakes you ever tasted.  Round, golden pillows of tastiness that my family has been spoiled with over the years.  Forget the store bought boxed stuff, serve up a platter of hot, fresh from the griddle home-made pancakes with real maple syrup and ding ding ding ~ you have a winner.  They are a special treat at the homestead served with Ontario produced Maple Syrup, thick cut bacon and maple breakfast sausages.

The second most-often used recipe would have to be the one for Paska Bread.  Traditionally a bread made for Easter, but in my family, has also been made for Christmas, Thanksgiving, and whatever excuse my hubby and kids can think of to get me to make more.  A rich, egg-laden bread that will easily become an instant hit in your household.  You can find the recipe here if you care to make some for your own family, but be warned though, it is an all-day affair to accomplish, and then you are trapped into making it forever…like that is a bad thing…

So this brings to my final thought on cookbooks…

I know which one is my favourite…what is yours?