What are your momentous Firsts?  I am not talking about the usual First Kiss, First Beer (and corresponding First Hangover), First Child or First Divorce…. Rather, what are the things you have never done or thought you would have never done in your life?  But somehow ended up doing anyway, much to your own surprise.

So many things I had never had ANY inclination or urge to do….happened to me for the FIRST time this past weekend.

It all started with my dear husband, the love of my life, my best friend,  whom I was ready to take and have a frontal lobotomy performed after his suggested idea  that we reshingle our cottage roof….BY OURSELVES.

Yes….two people, 50+ reshingling a roof with absolutely ZERO knowledge of how it is done, were going to attempt it for the very FIRST time.  Talk about lunacy….where are the men in white coats when you need them….

I need to back up for a second, lest my daughter and her sweetheart of a husband get even more peeved at me after they TOLD us ….no, they DEMANDED us to let them know when we were going to do the job and therefore WANTED to be here to HELP…but alas, dear husband is stubborn and doesn’t want son-in-law falling off a roof and breaking his spine into little bits and then they have to move into our home cause he can’t work anymore….ok, that is reaching for sure, but a valid fear none-the-less….(sorry to Laura and Scott for not telling you when we were going to do this.)

Ok, on with the saga….Now the internet is a wonderful thing.  You can find out instructions on just about anything, from what to feed orphaned chipmunk babies to making your own space suit, or in our case, how to reshingle a roof.

So, with a stack of instructions printed out, materials ordered and delivered and plenty of beer on hand (for consuming AFTER we get off the roof for the day, I have set forth  very clear-cut rules ~ NO drinking and climbing onto roofs PERIOD), we set out for an outdoor construction adventure in cottage country.

Here is the cottage roof before…plenty OLD and ratty looking and when the bump out for the bathroom on the right side was done many moons ago, the then owner just shingled the new part and left the old.  So nothing matched and it was pretty awful looking. 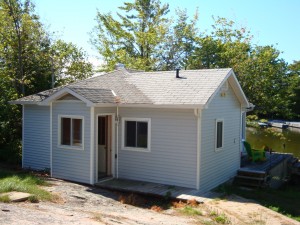 So my very FIRST of many FIRSTS this weekend, was to actually climb a very scary looking ladder (looks scary to me, hubs says it is the BEST ladder in the world though) and then step ONTO a roof.  Yes, little ‘ol me, the person who knows quite a bit about houses in the real estate world, was actually UP on a roof.

Let me tell you, it is the weirdest feeling being up so high with  nothing to hang onto or prevent you from falling off the edge.   You learn to behave like a mountain goat, placing each foot carefully and always maintain your balance (hence my NO BEER rule until off the roof at the end of the day).

So that was two FIRSTS done literally within the same minute of my life, going UP the scary ladder and ONTO the roof…. THEN, spending 4 days of a GLORIOUS, sunny, LONG weekend on a hot roof, in hot weather, trying not to look at all the people zipping by in their speedy boats towing float-tubes full of screeching and laughing people all over the lake…oh yes, I’d much rather be roofing a cottage than boating…for sure….

My next FIRST was using a hammer and nailing shingles in, and yes, while I have actually used a hammer before,  it  always came with a ‘you use a hammer like a girl’ saying as my dear husband is so fond of mentioning (and apparently I climb a ladder ‘like a girl’  and ‘throw like a girl’ too…pfft..whatever!), so he showed me how to hold the roofing nails (so I don’t clobber my thumbs/fingers) and pound it through the shingle.  After 4 days, my aim is actually starting to get better, as this is something I need to work on for future reference (like pounding  nails through his skull when he mentions we should do the roof at home by ourselves too).

I do have to give major kudos to hubby though for all the grunt work…and let me tell you, there is plenty of grunt work in shingling a roof.  The shingles come nicely stacked on a pallet delivered to the driveway, but due to the terrain/lay of the land, there is no way they could be placed on the cottage roof like they do for ‘city houses’.  He handbombed 28 bundles of shingles up onto the roof over the 4 days.  These things weigh in the neighbourhood of 85+ lbs each and he would sling them over his shoulder and hike them up the ladder.  I tried dragging one into the shade on Sunday – HA! I barely managed to drag one 20 feet across the grass before I let it go, panting and cursing.  How the heck does he DO THAT?!

It doesn’t matter though, all I know is I am NOT going to even attempt to lift one of those things up to the roof.  I am a girl after all… with a pretty manicure that I was desperately trying to keep looking nice inside the tar and goop covered work gloves I was wearing.

Speaking of goop…that was my next FIRST… I have never used a caulking gun before (see? many, many new things I did this weekend), these things are a definite challenge and you need a steady hand for control.  I have the steady hand part (my trim painting is legendary if I do say so myself), but trying to control the rate of flow of this black, goopy, stick to everything but the roof crap was really pissing me off.  Until hubs showed me the release handle on the caulking gun, if you don’t release the pressure, the stuff just keeps oozing out when you are not using it, like a possessed tube of toothpaste.

I finally mastered the caulking gun, the hammer (somewhat) and was motoring along nailing in shingles and trimming around the flashing all the while following orders from the boss pretty good,  which is highly unusual for me.

I did have three major casualties of the entire weekend though.  Silly me thought roofing was just a matter of stripping off the old and installing the new….. NOBODY told me how DIRTY of a job it actually IS (nor the amount of sweat one person can produce in an 8 hour period).  I ruined a pair of running shoes (my favourite pair), and totally trashed my most fav jean capri shorts and a t-shirt from Mexico…. there is so much tar and goop on them that they are un-cleanable and were pitched into the trash after Day 4 was complete. 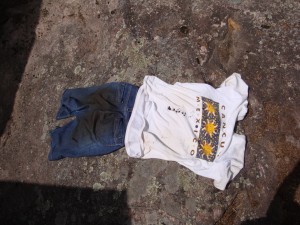 Oh that was another FIRST…wearing the same, disgustingly dirty clothes for 4 days straight.  It was a huge relief to get out of them at the end of each day (and hang them outside the cottage) but they were just horrid to put back on the next day.  I am far too cheap to trash 4 sets of clothes so wore the same thing every day (ick, ick, double ick!)

So now I get to go shopping for replacements, which I am looking forward to…did I mention the t-shirt came from Mexico? (BIG GRIN)

After 4 days of soreness and exhaustion, we finally finished.  I for one am NEVER going to be signing up for a project of this scale ever again.  Son-in-law is more than happy to help and I will gladly hand my hammer and caulking gun over to him.

I can proudly say “Been there – Done that – THREW OUT THE T-SHIRT”.

There…doesn’t this look much better? 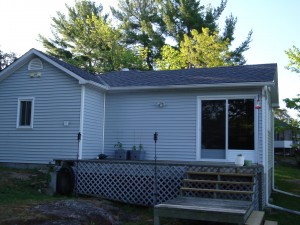 This really does give you a whole new respect and appreciaton for the guys who do roofs for a living….. from now on, I will not balk at a $5,000 roofing quote and gladly hand over a cheque.