Can you see me waving? 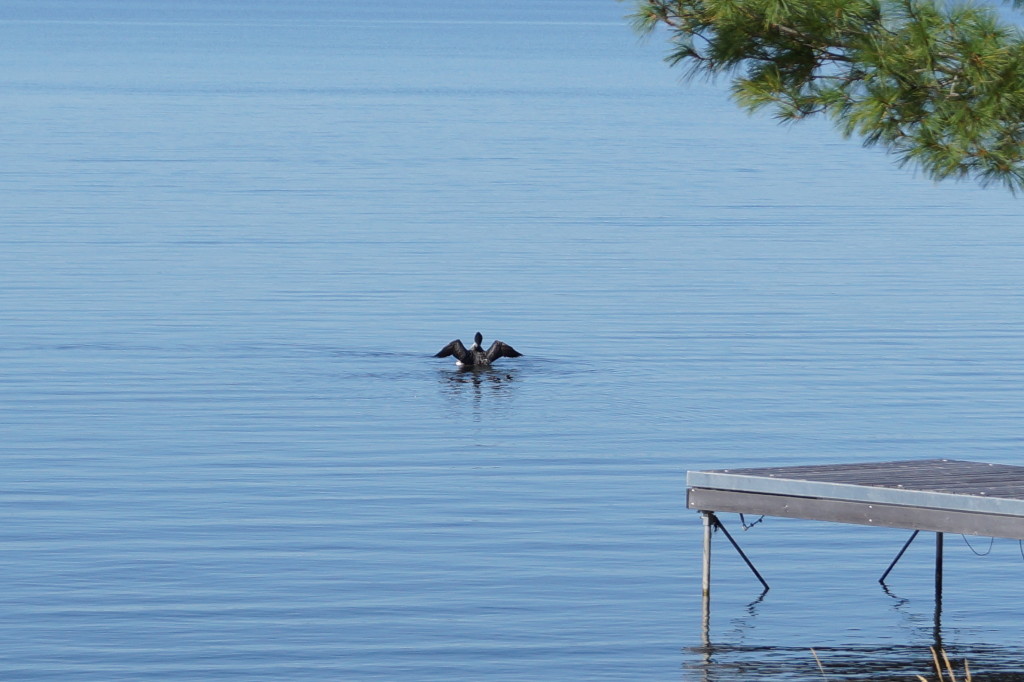 Long time, no chat everyone!  Totally my fault though as the past year has been nothing short of controlled chaos (and I use that term loosely).  Last summer hubby and I started getting our house ready for sale, meaning de-cluttering, purging, building a new bathroom, gutting and renovating the original bathroom and sprucing up the property.  All that effort eventually paid off, even if it tried our patience (and bank account) as we sold promptly this past March in 3 days.

After that it was on to the next challenge, finding someplace else to live.  We bought a lovely 1+1 bedroom condo apartment on the 8th floor overlooking Lake Ontario, and located about a km from our previous home.  Once we took possession, we then spent a week priming and painting over very garish colours and moved in at the end of May.  I spent a month trying to organize things to suit the new space, especially the kitchen, I probably spent the majority of time in there trying to find a good fit for what I use, when I use it, etc.  After that, it was on to figuring out what furniture that we brought with us would work and tossed what we couldn’t use.  We had already tossed our sofa and chair set prior to moving as they were well loved but no longer suitable.  So after living in the space for a month or so we decided what would best fit the space and then went furniture shopping (ugh, there really needs to be a better way to shop for furniture than walking into a big box furniture store and being immediately corralled by salespeople), anyway, we selected a sectional sofa and a new chair and got the heck out of dodge.

With the condo somewhat settled, it was time to split the big city and head north.  Prior to the end of June, we had not been up that much due to all the moving ruckus.  My vegetable garden was in place and growing nicely and wasn’t in need of much attention until later in the season but we did make sure to set up the automatic timer/watering system and let nature take its course so to speak.

So I packed up the car with a LOT of stuff.  Not just food and the usual household items needed everyday, but all my fun fiber stuff.  My small Cricket loom, knitting needle case, yarn galore, a very large tote full of alpaca fiber that I want to card for spinning and some already spun yarn ready for the next new *hobby*…dying with natural materials as well as planned sewing projects. 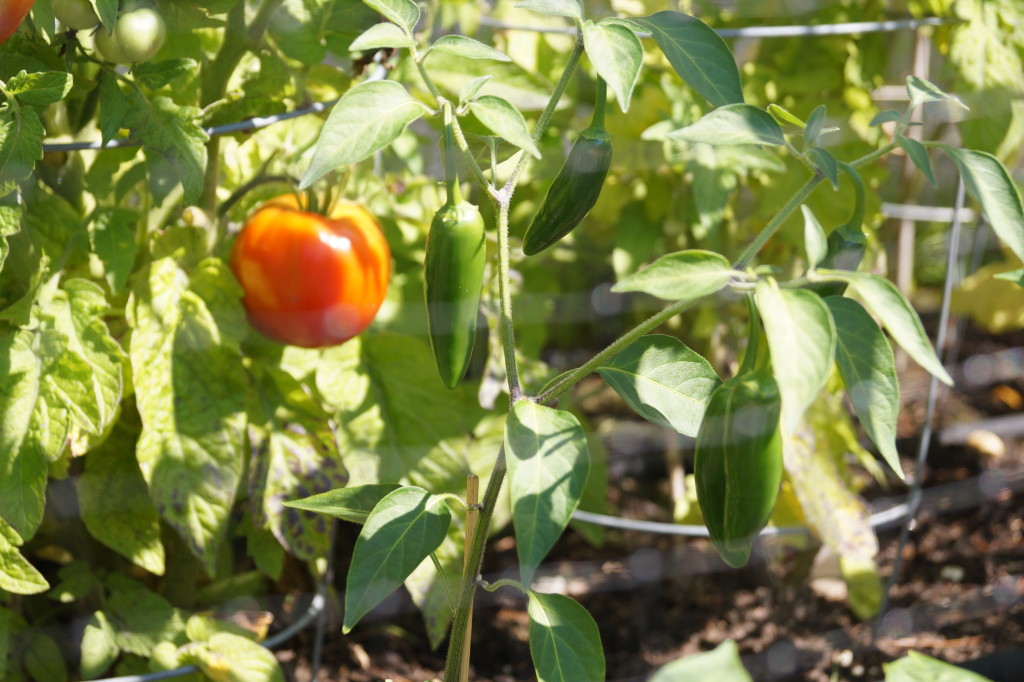 August saw my busiest month in the garden as it was starting to pump out tomatoes by the ying yang, there was a lot of processing to be done.  Over the span of a month, I probably roasted a good half bushel of cherry tomatoes (slice into 1/4″ slices, layer on a parchment lined baking sheet and roast at 225F for about an hour and half – awesome on pizza or in any pasta dish) and canned up jars and jars of stewed tomatoes and pickled Serrano/Jalapeño peppers.  I also made 2 batches of my Chipotle Peach jam, one for me and one for my daughter.  I  had also wanted to make more blueberry jam, but I was too late in going picking (others that were on the ball picked all that there was in the wild patch nearby) as well as we had a very dry summer so a lot of the plants were shriveling up from the heat and lack of rain. 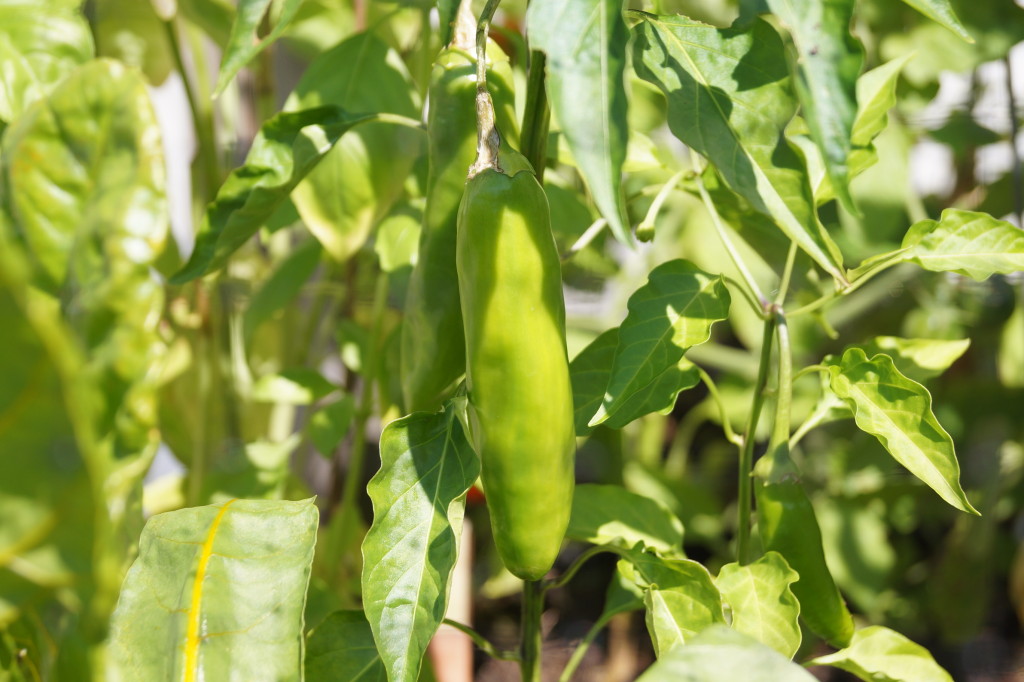 During the past couple months, I started dying skeins of handspun yarn with natural materials.  Birch and Oak leaves, Marigolds (seen here drying in the sun) and 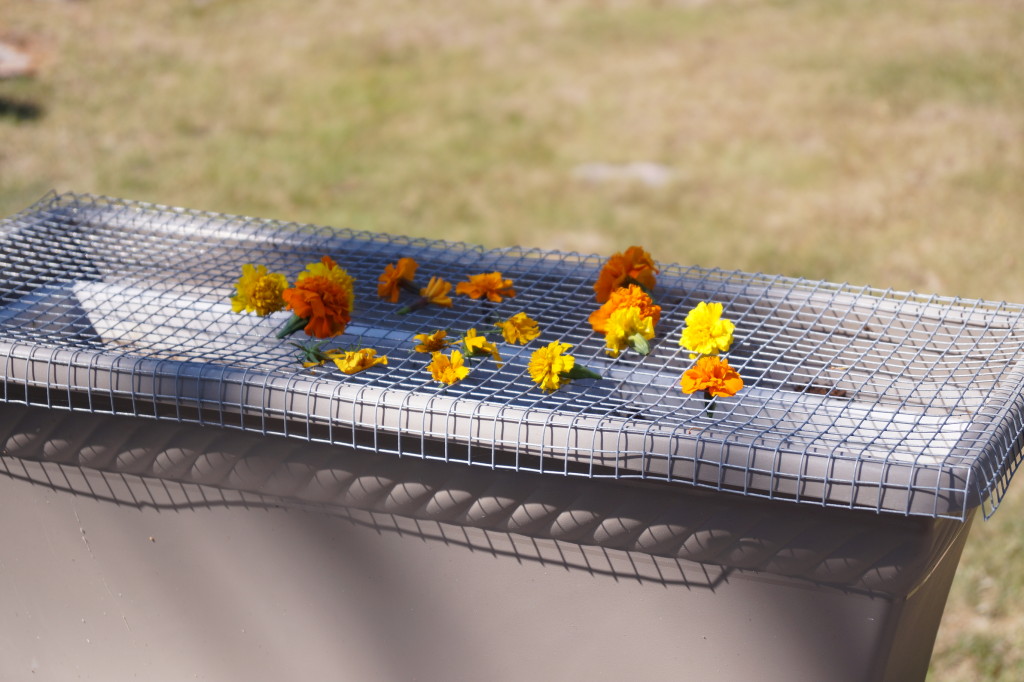 Tansy flowers (which are highly abundant weeds here in the north, like Goldenrod), Onion skins provided a lovely shade, which I dubbed “Antique Gold” as that is what it reminded me of,  take a look at the skein to the right of the bright yellow one and see if you agree. 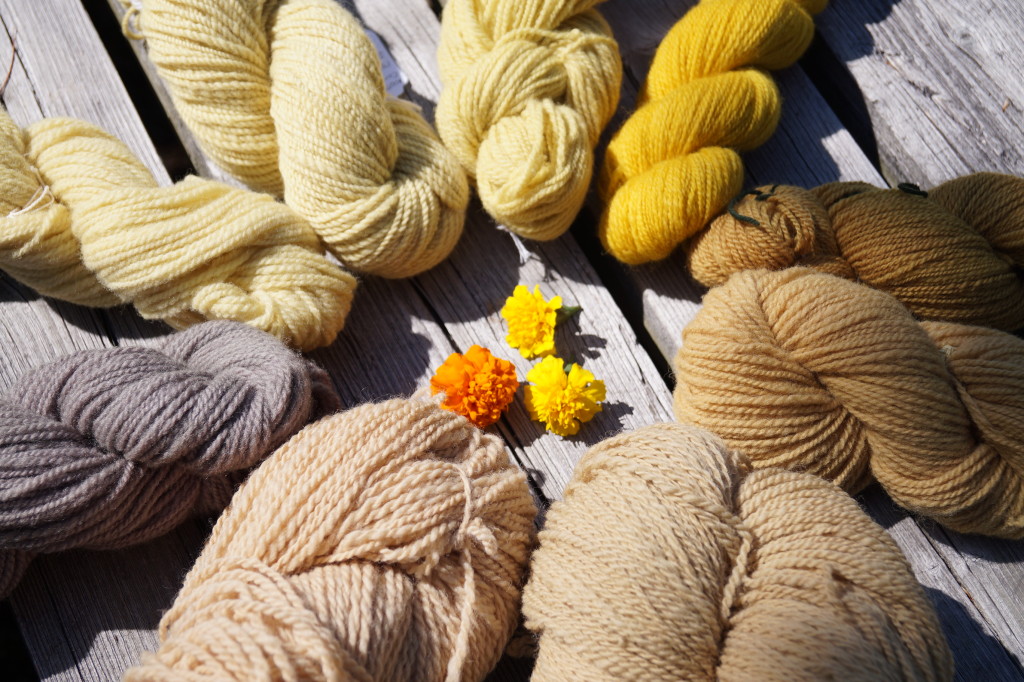 I then tried 2 attempts with a plant called “Phragmites australis” aka Common Reed.  It grows along roadsides and highways all over Ontario and is actually considered an invasive species by our government, so I did my part of hacking off the flowy flower heads to use as a dye.  I had seen someone else (on the internet no less, so it had to be true right?) attain a lovely shade of green using this plant.  What did I get?

Gray – with very, very faint hints of green and red streaks running through it (really strange actually), but very cool looking (the skein on the left in the above photo).  Apparently, so I am told, I need to harvest the flower heads in July, I had picked them in August so that is the only difference between what I had seen online and what I actually attained.

If it is one thing I have learned about dying with natural materials, is that you are never quite sure what you are going to get when you pull the skein out of the dye pot…take the vivid yellow skein of yarn that I dyed with Marigolds…talk about bright!! It is almost neon yellow, clown yellow I call it.  I saved the dye liquid and over-dyed another skein that was dyed with oak leaves earlier and it came out a similar colour to the onion skin dye.  After that, there was still colour left in the pot, so I placed another skein of yarn in and came out with a nice, mellow yellow that is similar to the Birch leaf dyed skein (Birch leaves give a gorgeous, clear, sunny yellow colour). 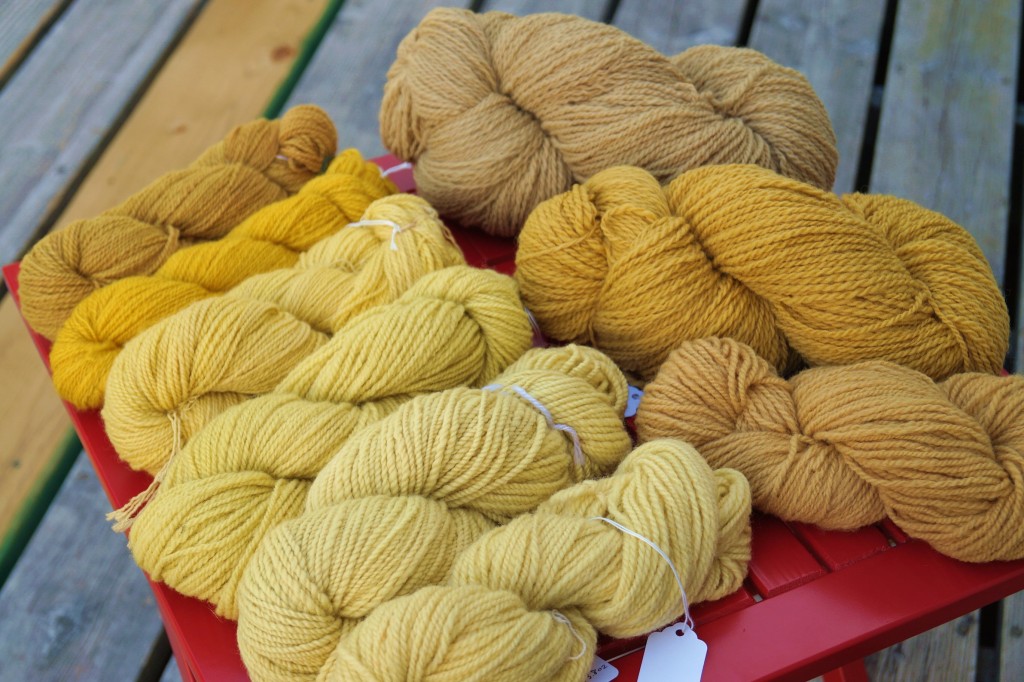 All these variations of yellow dyed skeins are destined for a weaving project, which will be the subject of another post down the road a while.

Nice, fluffy tubes of fleece (called rolags) ready for spinning.  Carding takes all the fibers from a fleece and arranges them neatly in one direction, easier to spin that way, plus it gets out any remaining bits of hay, dirt and dust.  This needs to be done on a nice calm day so you can sit outside and have all the bits float away outdoors instead of covering the inside with alpaca fuzz.

Not to be forgotten, my Cricket loom got a workout in July when I cranked out 6 scarves destined for gifts this Christmas. 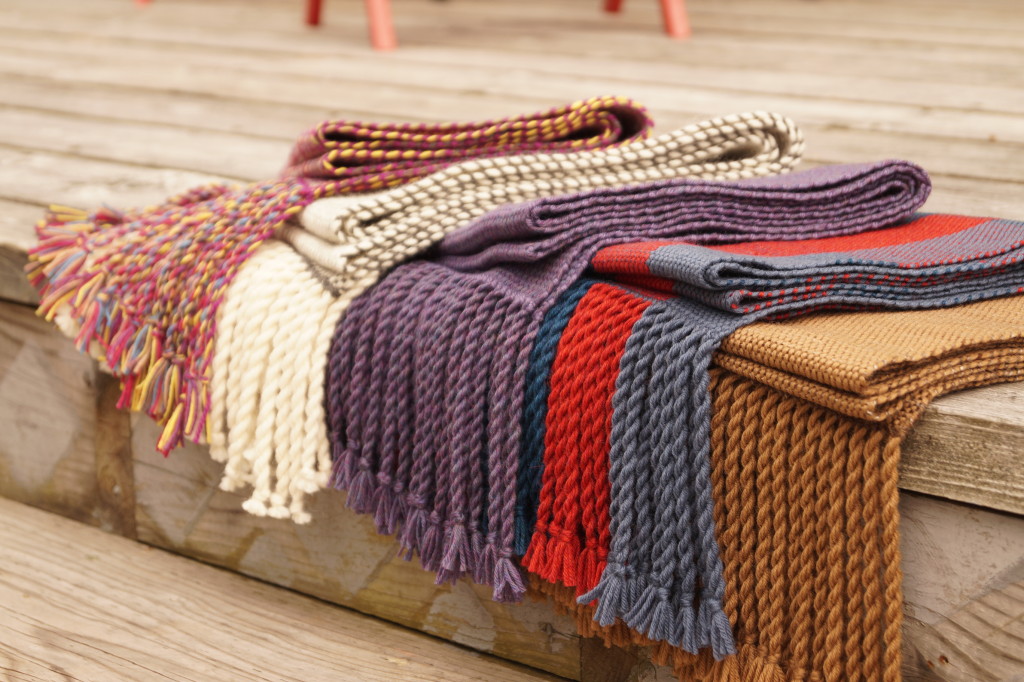 Nor did my knitting, I am currently working on a sweater made from Cotlin (blend of cotton/linen) yarn, but it has been on the back burner the last couple weeks as we had a spell of hot weather that makes it uncomfortable to try and knit a large item in the heat so I switched to a pair of socks and now finishing up a hat made from yarn that I spun ON MY NEW WHEEL! 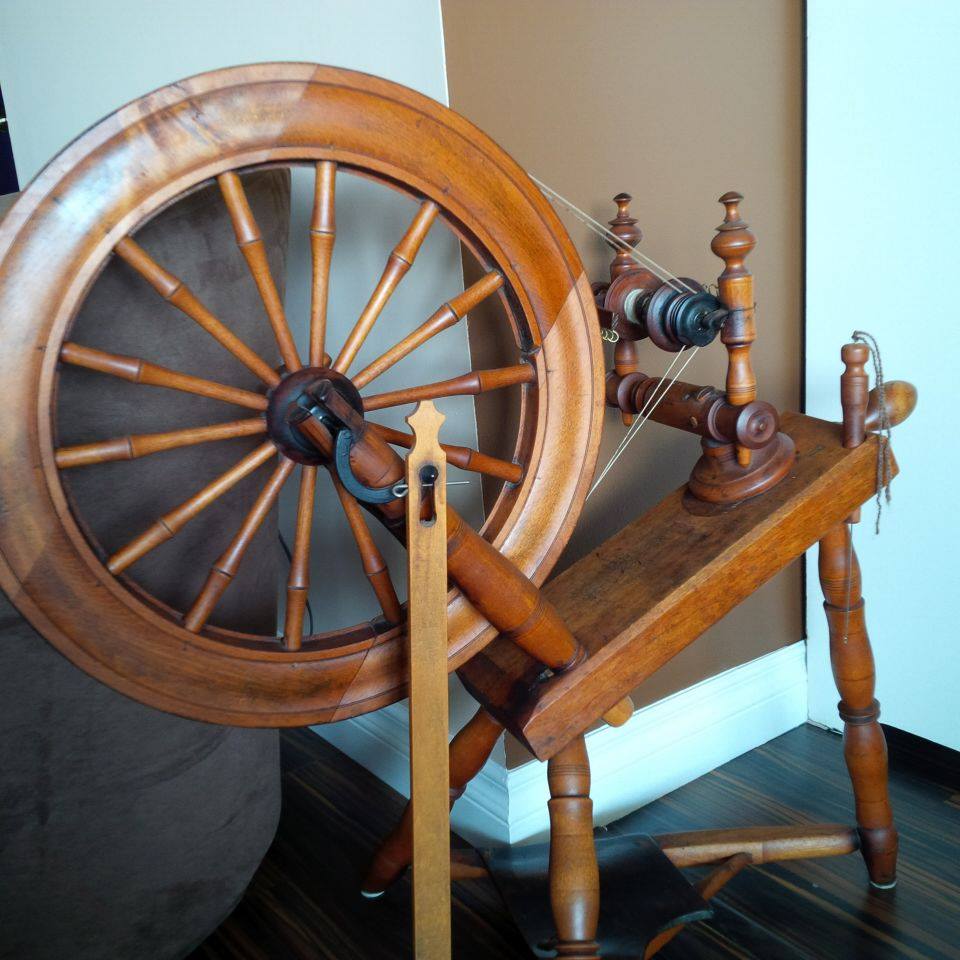 Isn’t she just gorgeous?!  She is lovely and old and estimated to be over 150 years but doesn’t look a day over 30.  She spins like a dream too, a nice, smooth and even action.  Then I went and did something stupid, I was trying to get the full bobbin off the flyer and snapped the flyer in half….I then spewed out a string of very un-lady-like verbage which would make many a sailor blush.  So the flyer has just been replaced by a fellow I found nearby to the southern home that makes and repairs spinning wheels and I am back in business.

Now don’t think I just sat on my tush and knitted, spun and wove all summer.   I also did some heavy lifting, in the form of wheelbarrow-fulls of sand and dirt.  We had a pile of sand that I had started to sift and relocate as where it was situated, the fella that plows our driveway in winter kept heaping snow laced with driveway gravel on it.  So I painstakingly sifted about 2 yards of sand and wheeled it over to its new home off the side of the driveway (after depositing more on our beach along the way).  This was a 2 year project as where it was located, could only be done after mid-August or you were swarmed by skeeters, plus, if it rained, well, that made pushing the sand through the home-made sieve really challenging.  With the stretch of hot sunny weather a couple weeks back, I managed to get the rest of it sieved and moved….then, last week I had 2 yards of dirt delivered….for…. my new garden bed!!! 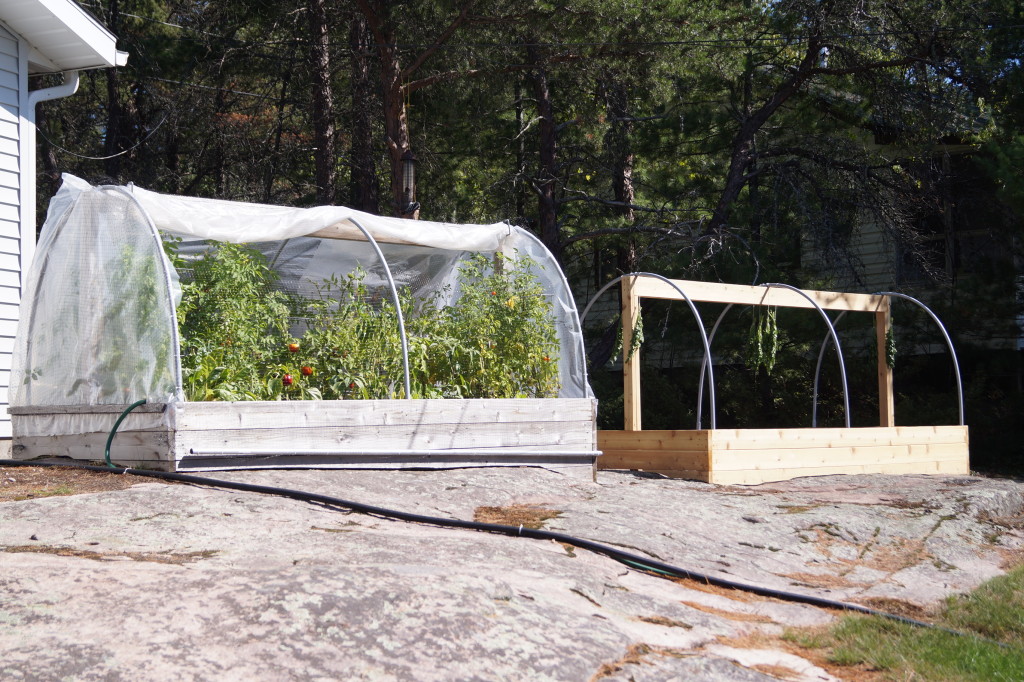 I am so excited!  Hubby built another raised garden bed for me, a twin to the existing one which basically doubles my gardening space.  We spent this past Sunday morning moving dirt and filling her up, she looks beautiful and I am so excited for next Spring’s planting and will spend this winter getting my seed selections and layouts done – woo!

Well that pretty much gets you all caught up on my summer antics, there was more, but these were the highlights.  So what did you do on summer vacation?  Would love to hear what you all had going on so leave a message below!