Sounds yummy doesn’t it?  Cake Dyeing….  Unfortunately no yummy cakes were baked, dyed or consumed for this project.

Cake dyeing is taking a skein of yarn and winding it into a “cake” with a ball winder and then dyeing it.  The word “cake” came about due to the resemblance of the wound yarn to a stacked layer cake.  This creates a centre-pull “ball” of yarn to knit from.

Ok, enough of word origins, on to the experiment!  I found 3 balls of sad looking yarn in the “free bin” in our condo craft room.  2 were an ugly golden-yellow colour, the third was a really ugly greenish-gray ball of what surely came out of a swamp.  No wonder they were cast off from whoever put them in the bin.  Nobody wants butt-ugly wool.  So I rescued them a few weeks ago with the intention of brightening them up in a dye experiment.

Enter cake dyeing.  The process where you wind yarn into the cake shape and submerse it up to half its height in a dye liquid, flip and do another colour and you come out with a wonderfully colour-patterned yarn. 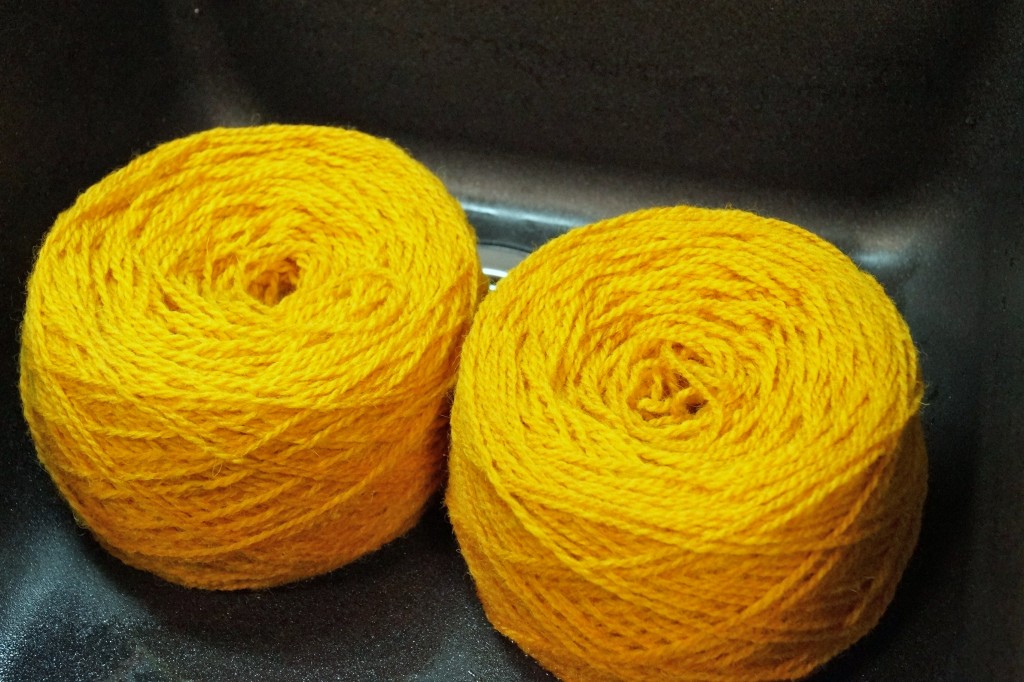 First off was to soak the 2 gold ones in water and citric acid (or vinegar) to prep the wool to accept the dye.  I then took a roasting tray with a rack and placed enough water in it to come up to halfway up the cake of yarn.  I then added my dye stock which was 1/2 tsp of Wilton’s Icing Gel red food colouring to half a cup of boiling water, stir to dissolve and dump in.  I also added another 3-4 tbsp of vinegar too.

Add your yarn and bring the temp up to 170F and simmer for about an hour.  I carefully flipped the cakes over and let the second side soak for another hour.  Turn off the heat and left them to cool.  Once cool, rinse under the same temperature water, wind back into a skein and let dry.

The results are 2 very bright skeins of yarn now worthy of knitting.  I call these 2 skeins “Orange Sherbert”. 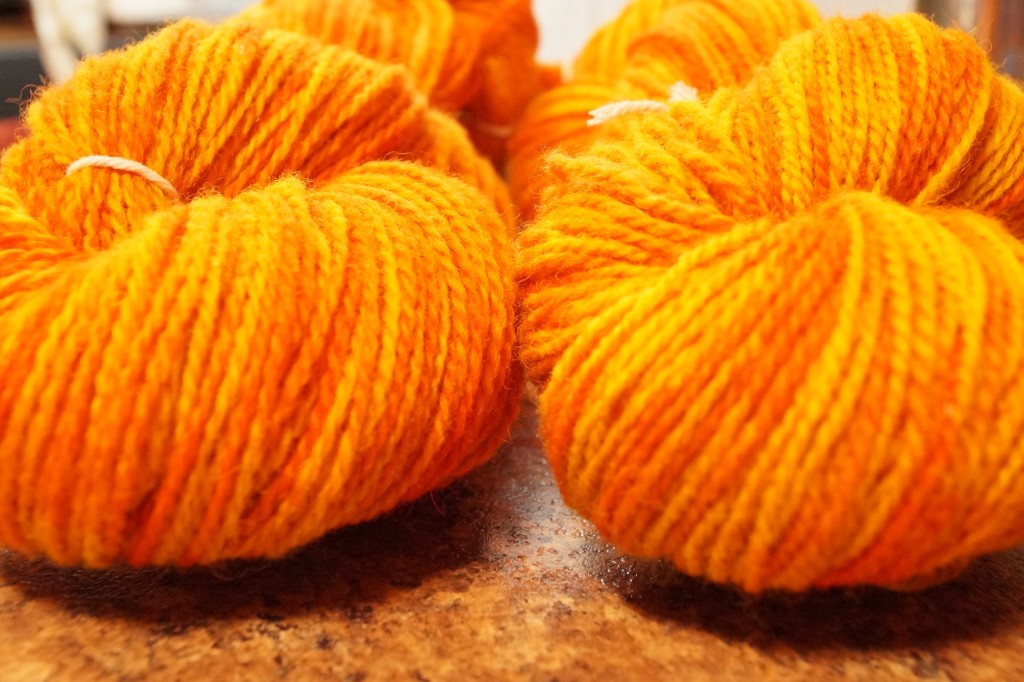 Now with the other skein of butt-ugly greenish-gray yarn, I omitted the pre-soak to try and get the colour absorption to slow down.  Which worked a little too well as the colour didn’t penetrate as far into the cake of yarn as I would have liked.   The other steps were the same except for not pre-soaking. 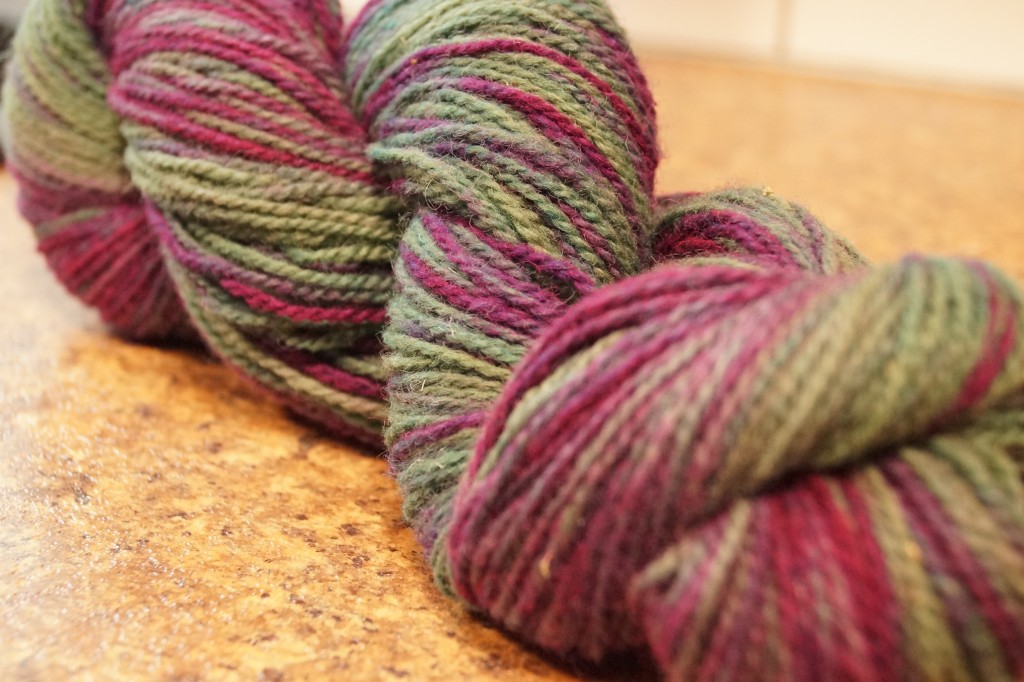 Burple ~ which is a combination of Butt Ugly and Purple.

I will re-dye this one solid purple as I really don’t like how it came out.  But heck, that is why they are called experiments as you never know exactly what you are going to get!

He is a handsome fellow, showing very few wrinkles for his age, considering he was born in 1867.  He is of slight build and heavy for his actual size, which would be the dense hardwood that makes up the bulk of his body.   Although he may be heavy, he is delicate at the same time.  Lovingly carved spokes on his drive wheel, curvacious turnings on the maidens and legs, remind me of Marilyn Monroe…perhaps “He” is a “She” after all.  Ah…there you go, I have found her new name.  Marilyn.

I discovered Marilyn when I was least expecting her.  I usually cruise the kijiji listings for spinning wheels just to see what is out there.  Mostly large CPW’s (Canadian Production Wheels) as well as European and Scandinavian models that are quite striking in form and function and liberally scattered throughout Ontario.  But a couple weeks ago, I stumbled across the McIntosh wheel which happened to be located in the city next door to me.  I answered the ad immediately and later that morning, picked her up so she could join the rest of the herd.

She now joins the stable with Beth, Blanch and The Grand Dame.  Unfortunately, when Marilyn entered the household, someone had to go.  Blanch was the logical choice as she was the most recent acquisition, but her large size was a hindrance in our downsized existence.  With a wee bit of sadness, I let Blanch go to a new home, to someone that will appreciate her quirks and put her through her paces to spin some fine yarn.

A brief history lesson on McIntosh wheels:  Alexandr McIntosh (not a typo, the “e” doesn’t appear on his maker’s mark) and his family, came to the East Coast of Canada in the 1700-1800′s.  Father and son (presumed son, information is sketchy about  the family lineage) made spinning wheels in Nova Scotia.  A lot of really good looking wheels of that era were made use of every day.  Prized for their well-built construction and small stature, they were very popular wheels along with F. Young, McDonald’s et al.  Seems a good amount of wheel makers came from Scotland seeking their fortunes in the New Land.  A lot of these wheels then moved from Nova Scotia to Ontario as they were easily transportable due to their size and the ease of which the drive wheel came off.  Hence, why there seems to be a good amount of them here.  This one came from a well known collector just outside Hamilton, and when he turned ill, his collection was sold off.  The woman who purchased this wheel had the intention of learning to spin, but upon realizing it wasn’t for her, she decided to sell the wheel.  My lucky day indeed! 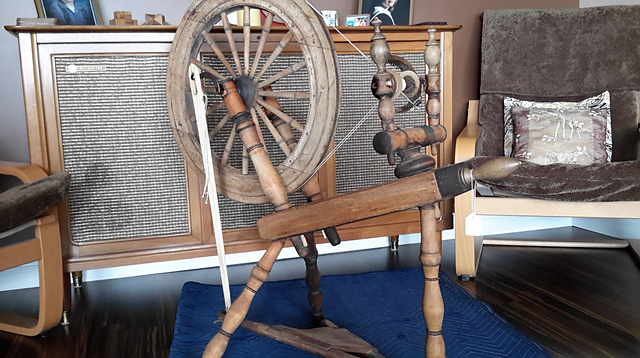 Marilyn needed an intense spa session when she first came home.  After a good bath in Murphy’s Oil Soap followed up my 3 liberal coats of Howards Feed n’ Wax (marvelous stuff, can’t say enough about this product), she now shines and doesn’t look a day over 100. 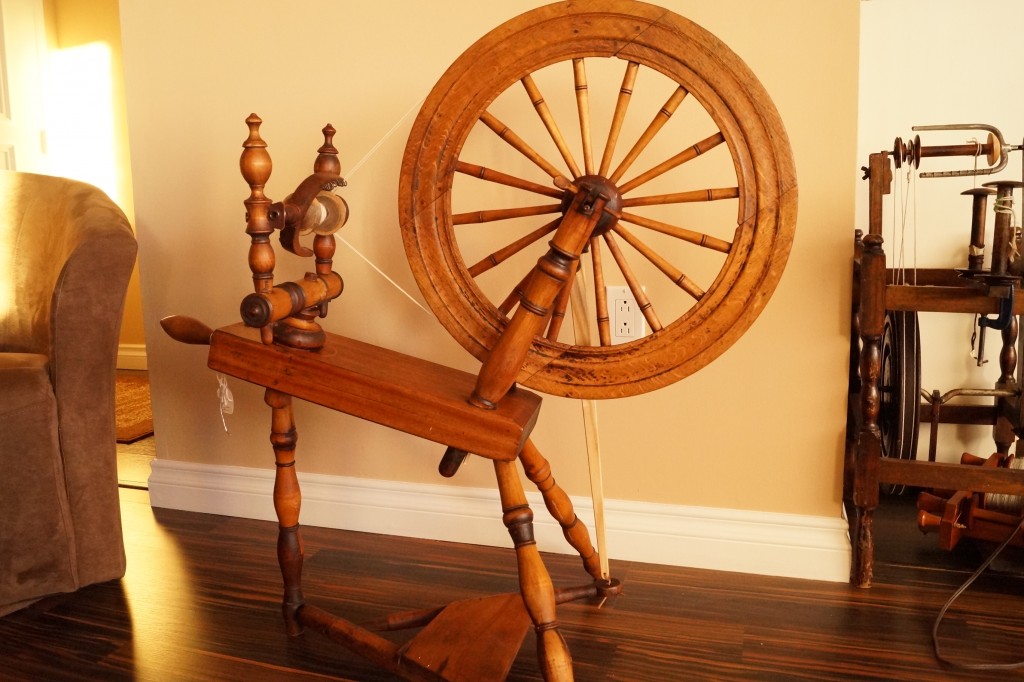 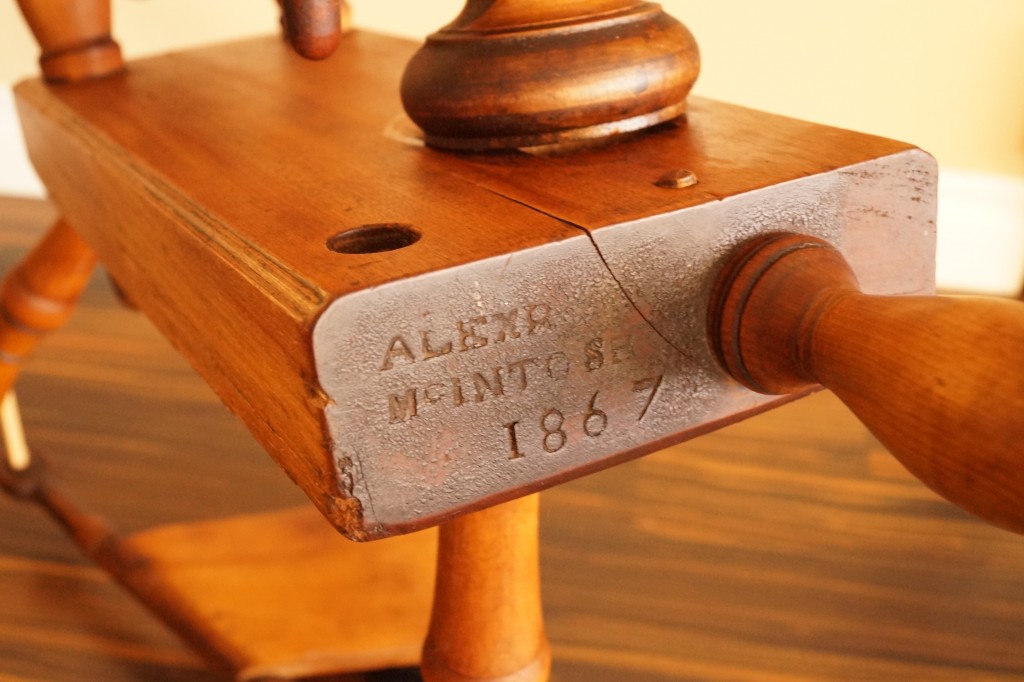 Hubby worked his magic in reaming out of the bobbin and cleaning up the pitted flyer rod, which he has had to do on all my wheels, he’s a definite keeper.  She now spins like the day she was born and its’ time to get down to business and see what gorgeous yarns come from this fine example of old Scottish workmanship.

Now, about cruising kijiji for spinning wheels, I think I can stop looking